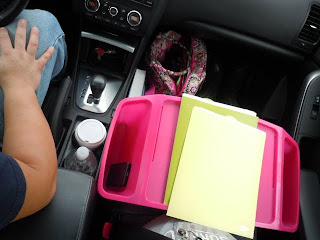 I’m going to skip my Friday since I can make 2 other blogs out of that.  For now, I’m just going to tell you about my weekend.  Remember how I said I was going to skip rugby?  Well, I really didn’t want to, so I headed over to Micheal’s for an essential.  If I was going to rugby, I would need to do at least some homework while I was there.  I bought a lap desk and go to work in the car (away game).  Luckily, the one class’s homework was easy and I got quite a bit done on the other class too.  It was great working in the car.  Didn’t do so much working during the game though…

The town we played was a suburb of Philadelphia.  It was… interesting.  You had to look for dog poop everywhere and this one muddy spot on the field smelled like a leech field.  More on that in a minute…  Anyway, we got slaughtered for some reason but our scrums were strong I think.  We kept pushing them back in those but we still lost.  Oh well!  Let’s just say it was a messy game with regards to testosterone and mud.  Someone from the other team took a swing at Rob!  He is completely non-aggressive and walked away.  Typically, most guys would get into a fight but Rob is just there to have fun so he doesn’t want to have pointless fighting.  Anyway, here are pictures! 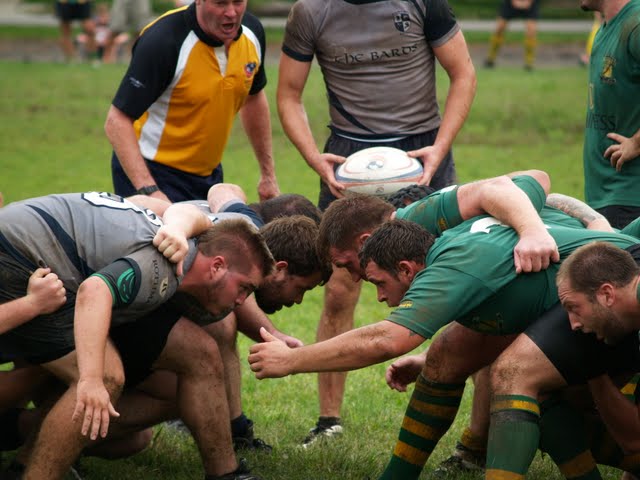 If you look center left, that is Rob.  He is the “hooker” and is right in the middle of the scrum.  His shoulders get pretty beat up! 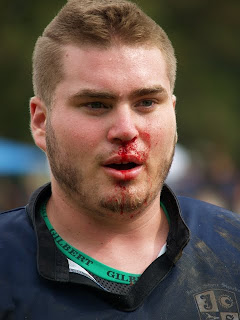 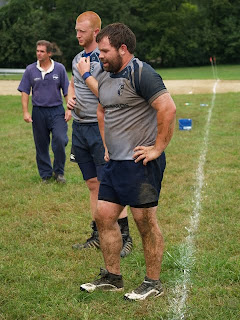 Can you see how muddy Rob is?  And this guy broke his nose and went back in later in the game! 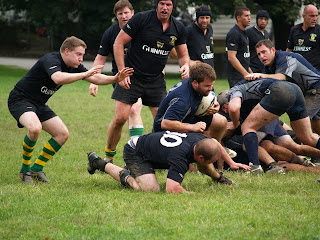 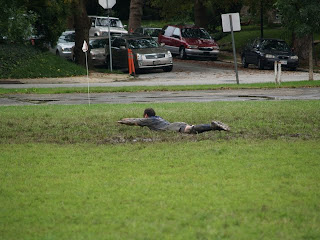 Some people had way too much fun in the mud.  He got tackled in this and was half covered and then decided to slide through it.  Then, he realized it smelled like poo.  HA!  So everyone tried washing him off with water as well as they could.  I’m sure he was thankful for a shower!  So afterwards, we went to the home team’s bar which was SCARY.  But we headed out to our sponser’s bar The Bards in center city.  This is where I get in trouble.  I decided to have their delicious Irish stew and 2 Dogfish Head Pumpkin Ales. 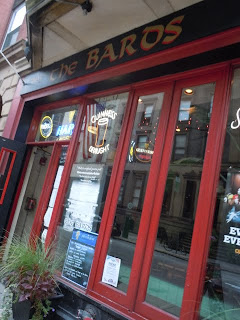 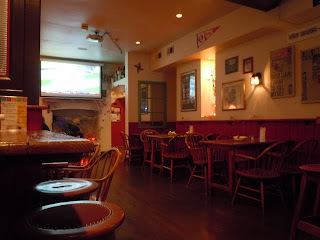 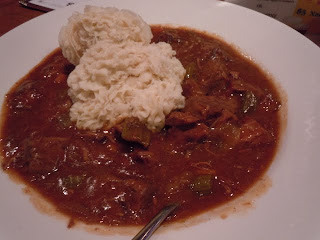 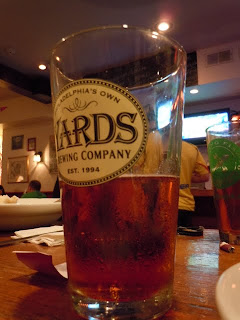 And since we’re being bad, why not walked to CapaGiro again for some gelato, right? 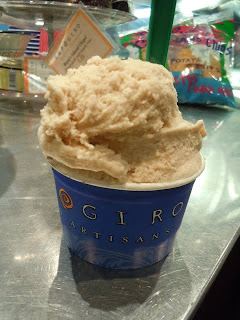 Worst idea ever.  We had a great time on Saturday.  Sunday was fishing trip day.  Oh, and as you can see, I didn’t get my run in.  We left the house at 9AM and got home after 9PM so no go (and it was raining all day).  I figured after the boat ride on Sunday, I would run then.  HA!

We were worried that it would rain for the trip but in the morning, we all decided to take a chance and go.  Our friend Patty got us a fishing charter through her business and invited us out.  We were rushed in the morning (I never even heard Rob’s alarms I was so tired) so we hit Wawa (bad idea #2).  I wasn’t really feeling very well when I woke up but decided I needed to go to keep Patty company with the men (bad idea #3).  It actually ended up being perfect weather. 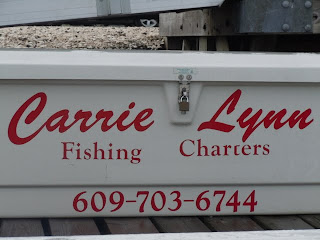 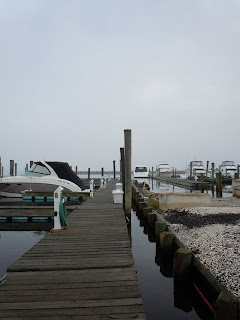 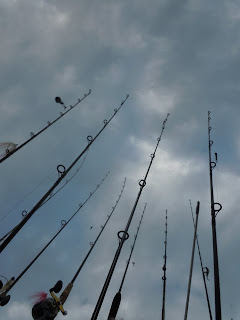 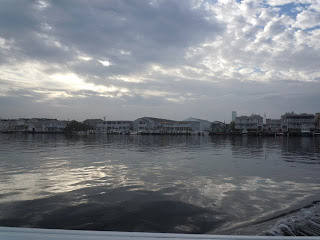 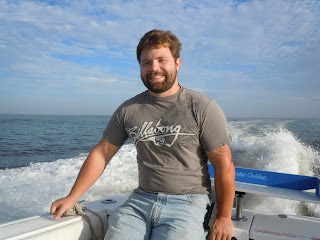 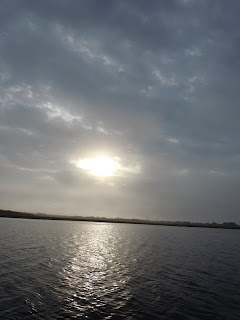 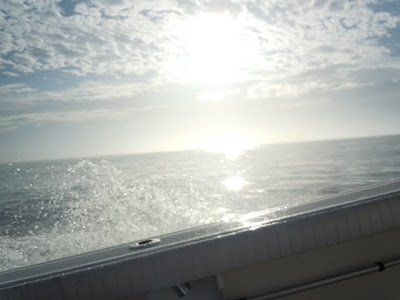 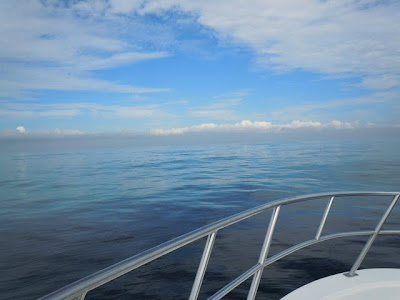 Well, something wasn’t going on right in my belly and I was sick as a dog the whole time!  Please don’t say “you should have taken dramamine”.  I NEVER have gotten sick on a boat and I’ve been out on my dad’s boat and friends’ boats MANY times.  Even went on a cruise.  I never get motion sick so this was just craziness (aka bad eating).  Ah well, it was enjoyable the times I felt ok.  But I felt bad for everyone else.  We managed to get our 4 hours in though and headed home.  The rest of the day was spent recouping.  I ate tortilla chips and drank soda (OMG I know! but I needed the sugar).  I am still iffy today.  But this leads me to my lack of run this weekend.  Over a week now without a single workout!  Tonight is the planned run but now I have to stay in Delaware later because a rock hit my windshield on the way here today.  I have an appointment with Safelite at 3:30.  UGH!  So I want to run tonight but I have homework and I haven’t gotten to sit on my couch in like a month.  Couch sounds nice too…

Soooo I’m really busy.  I have to run to go do more homework.  Then class, windshield repair, then home.  I found some apartments down here that are reasonable but am waiting for a few months to get one.  With commuting, I can still work a few hours a week and I could use that extra income!

To end, pictures of my crazy cat trying to look out the window.  Otto is such a goofball. 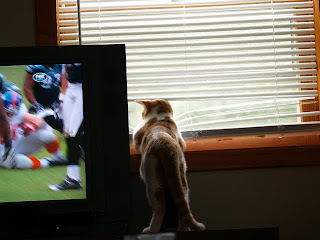 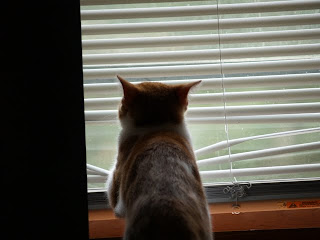 Have a great Monday!