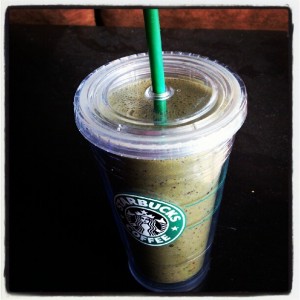 Today’s smoothie was inspired by a recipe I found online for a Cinnamon Blueberry Gingerbread Smoothie but I just didn’t have all the ingredients so I made my own thing.

I also threw in my Brown Seaweed capsule and my amino acid capsule (can’t remember which one it is).  Verdict:  it’s ok, not my favorite but has a very interesting flavor with the cinnamon in there.  Might try adding some protein powder next time and chia seeds and take out the banana (I used that as a thickener).  Not bad for just experimenting!

Only problem with smoothies for breakfast is that it interferes with my morning coffee.  Anyone else have this problem?  LoL

I’m not feeling very inspired to blog this morning so I think I’ll stop here.  Thank you to Esther who gave me tons of blog ideas after I sent out an SOS on SparkPeople but my brain just doesn’t want to function that deeply right now.  I will be saving all those excellent topics for another day!  Happy Hump Day!