Delicious Eats: Recipes of the Week

Today’s blog is all about food!  Between Pinterest and PunchFork, I have recipes coming out the wazoo!  I prefer PunchFork because there are more healthy recipes there and my favorite Paleo cook, Nom Nom Paleo, is one of the contributors.  Pinterest is nice when I’m browsing the web and want to save a recipe I find.  But with all these saved recipes, I should really start making them (just like my Pinterest projects I’ve been doing!).

So I decided this week that I would make a meal plan.  I put all my recipes (and accounted for leftovers following my Tips on Meal Planning) on a spreadsheet and scribbled down the few ingredients I needed.  Also following my tips, I made sure to think of what I already had at home in the refrigerator before making my plan.  I had an overabundance of grapefruit, lettuce, and kale that needed to be used.  Lucky for me, I found a few grapefruit recipes on PunchFork! 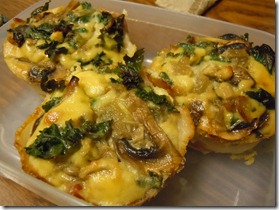 I also already had a recipe in mind that I wanted to try and I just modified it to fit what I already had at home (kale).  It was Nom Nom Paleo’s Prosciutto-Wrapped Mini Frittata Muffins.  I used bacon instead of prosciutto so they came out super greasy (don’t try that) and they took way longer to bake, but they taste AMAZING!  I recommend this recipe for anyone, Paleo or not!  I’ve been eating these all week for breakfast

Next up was to tackle Glazed Salmon with Spicy Grapefruit Relish by Martha Stewart.  I never really follow recipes so I just kind of winged the relish part.  It was my first time cutting up a grapefruit for such uses so that was interesting. 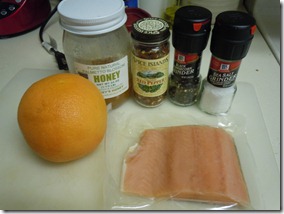 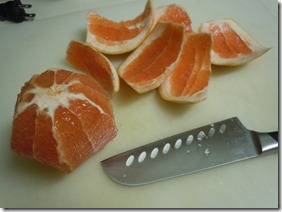 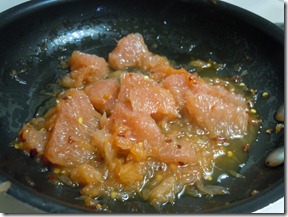 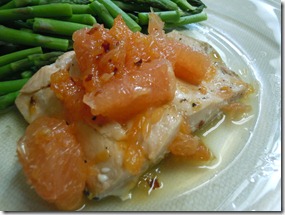 This was also fantastic!  Not as “OMG WOW” as the muffins but still really good.  I had some leftover salsa tonight that I put over Tilapia and thought it went much better that way.  This is a keeper too!

Finally, I just needed some ideas for lunches so I looked up “Grapefruit salad” on PunchFork and found Shrimp, Avocado, and Pink Grapefruit Salad by the Healthy Foodie.  I just used the idea to throw those ingredients together to make my lunch yesterday.  I did not bother making her dressing which would probably help but I am too lazy.  Too many ingredients!  But I’m sure this would taste much better with it.  I just used some of the grapefruit juce and olive oil (which tastes terrible).  I had intended to use sesame oil (but forgot) which I did for today’s salad. 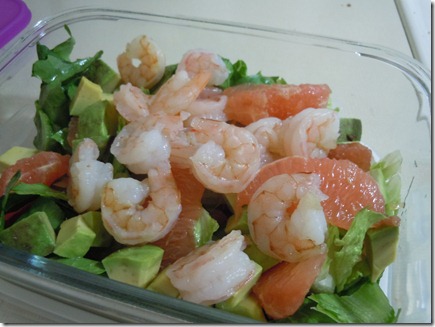 That’s all the recipes I’ve tried this week and I don’t plan on any more.  I think I need to eat something other than seafood tonight for dinner.  LoL.  I made banana ice cream (pureed frozen banana) the other night which I usually loath but I really wanted something creamy and cold that wouldn’t kill my Paleo habit. 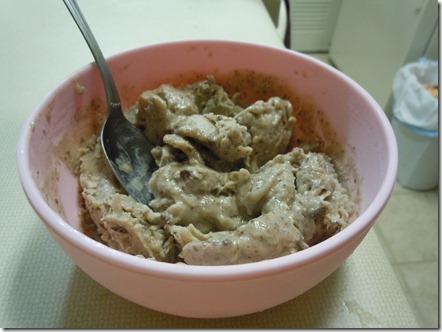 Then yesterday, I was completely starving all day!  I was craving high fat food hard core too.  In the morning I had a little chocolate muffin with my coffee as my 1 cheat for the day.  By late afternoon, I still wanted something but this time it was fried stuff.  To save myself, I stopped at Boston Market for dinner since I knew I could get something relatively healthy but bad at the same time  Make sense?  Of course, everything was covered in butter and I ate that wonderful corn bread.  Calories came in under 600 though! 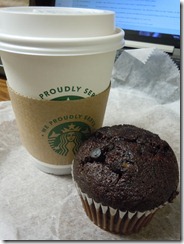 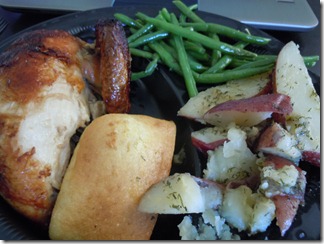 I definitely think it was easier cooking this week because of my meal plan.  I usually hate making them even though I know how helpful they are.  Honestly, it took me about 15-20 minutes to make my plan for the week.  Of course, it helped that I knew I had to use grapefruits so I just searched recipes with them in there.  Maybe I can have weekly themes?  Maybe next week can be Zucchini week or something!

Photos of the Day

Instead of overwhelming you with one giant picture blog, I let you see the chicks yesterday and today is the Cupcake Kitty!  She has really come out of her shell.  She used to be so skittish but we’ve been taking pains to help her be more comfortable.  She really opened up after we got Stormageddon, probably because now there is someone smaller than her! 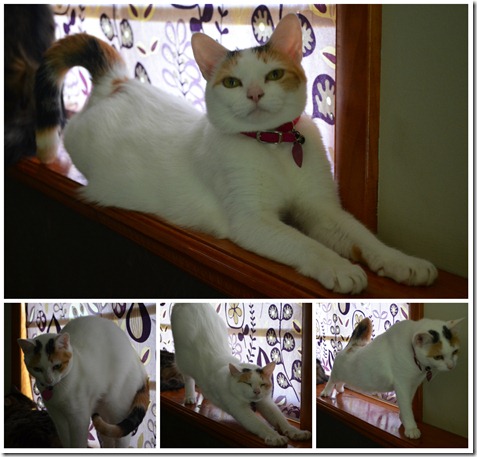 4 thoughts on “Delicious Eats: Recipes of the Week”