Just What I Needed

Cats Decorating Running
August 19, 2011 by Angela1 Comment on Just What I Needed
After work yesterday, things started to look hectic.  I immediately went to check the cats’ nails.  We had 20 nail caps on total.  Out of 52!!!  Spooky actually had the most at 13 while Cupcake had 6 and Otto had 1.  WTF?!  We think that the XS nail caps were too small for the kittens.  We got to work.  Luckily the small caps were too small for Spooky so we used medium on her.  That meant we had a whole pack of small for Cupcake and Otto.  As of this morning, it looks like everyone still has their pretty nails on!  Poor Otto though had to wear purple because that’s all we had.  He won’t notice! 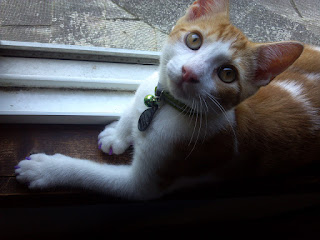 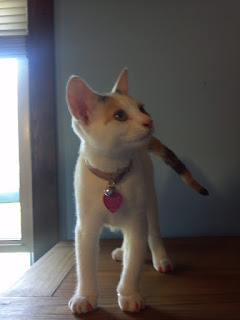 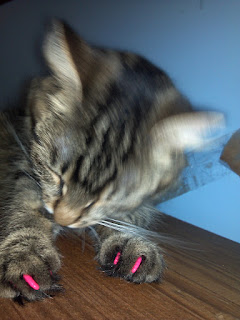 Then it was time for the cats to move.  They are taking it pretty well.  Otto follows me around the house (no big surprise there).  Cupcake sleeps in weird spots (like normal).  She did get upset yesterday because she couldn’t find me.  I called out to her and she came running but ran between some things and couldn’t find a way out.  She was cryyyying (she never meows).  I walked around and picked her up.  She instantly fell asleep in my lap while I was on the computer!  Happy kitty!  Spooky has just been hiding anywhere she can find.  Finally, she found the bed and hid under there (she always liked it under there).  They all stayed under or on the bed all night.  I think it’s the one thing that smells familiar to them so it’s comforting.  This morning, they all were following me around while I got ready for work.  I think they wanted soft food but who knows where that is!  Ha!
After the cats were moved, I had to get my laundry out of the dryer and hang it right away to avoid wrinkles.  I got to work on that.  Also, my dad and Rob would be working on the bathroom anyway so I wouldn’t be able to shower.  Finally, I pestered Rob enough that he told me to head for my run and hopefully by the time I got back, the shower would be done.  I got changed and headed out! 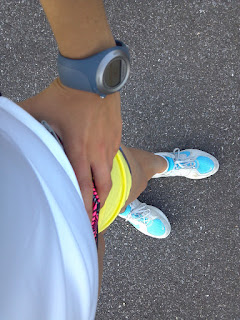 It was the BEST RUN!  Oh I so needed that.  I had set my Garmin for 4 miles but I only planned on doing about 2 (I always overshoot just in case I decide to go a little farther).  I headed toward my usual 2.2 mile route.  I got to the turn around and headed back.  I got to a side street I could take to make it longer and decided that I felt pretty good and didn’t feel like stopping so I turned to run to the end of the street.  I got to the end of the street and like auto pilot I turned down the next street.  Finally, when I got to the end of that one, I was at a busy road.  I knew if I kept going, I would be looking at least 5 miles.  I was started to get hungry and had to pee so I decided it was time to head back.
My garmin informed me that it was done when I was still about a quarter mile from my house!  Ha!  I just put the start button to continue and took a nice easy jog to the house.  I don’t know exactly how far it was or how fast I was (I have a feeling I was pretty slow but I was enjoying myself so its ok!).  All I know is that I really needed that run.  My last few runs have been terrible and this one reminded me why I do it!  Could have helped that it wasn’t 10000 degrees outside and there was a cool breeze too.  It was just the perfect run!
The shower was ready when I got back.  I cleaned up and we headed out to do some errands.  We stopped at Big Lots to get more hangers and I found this funny sign.  Rob protested. 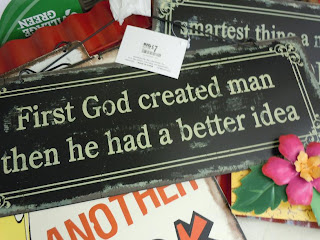 Big Lots could be dangerous.  They had lots of cool stuff!  We didn’t do too bad and headed home to relax.  We had planned on cleaning and organizing more since it’s still a wreck 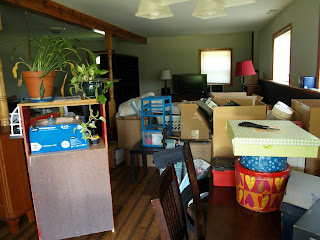 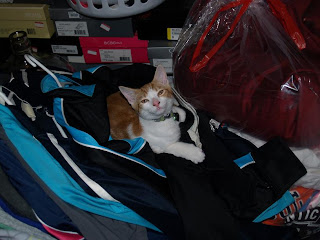 As you can see, Otto approves of the pile of clothes in the bedroom!  Ha!  We were just too tired.  I finished putting away my laundry and we finally got to bed!
How are my goals for the month?  Well, I don’t know.  LoL.  My tracking has been off and on.  Water is getting better.  Yesterday was my first workout in over a week.  Spending has been better than before (trying to spend cheap at least).  My food hasn’t been great but I’m excited to get the kitchen organized this weekend and get back to cooking!  Yay for being sort of back to normal!  Getting there!!

One thought on “Just What I Needed”