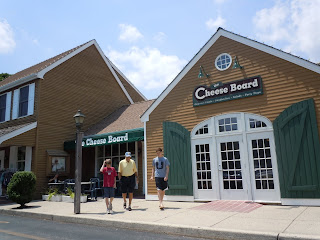 Today’s stop was my favorite lunch place ever!  I don’t go here nearly enough honestly.  It is just never near where I am so I have to make an effort to go.  Anyway, I was really craving an fancy sandwich so we decided to head over.  Rob wasn’t hungry so he didn’t care where I wanted to eat! 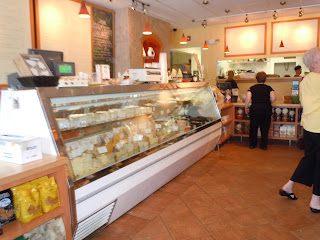 You order at the deli counter when you walk in.  I forgot to take a picture of the menu.  I was already embarrassed because the flash went off when I took this picture!  Oops!  Anyway, I didn’t feel like thinking about my order and the special sounded good so that is what I went with. 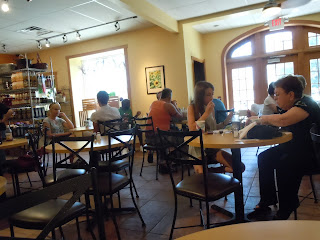 There is indoor and outdoor seating.  After you order, you can just go sit and they will bring your food out to you.  This used to be half the size but they expanded after they became more popular.  You can also see some shelving on the left side of this picture.  They sell some fancy food items, usually all natural and/or local.  I grabbed some Kashi crackers while I was there since I needed some and it is also the first place I ever saw the blue potato chips (yum!). 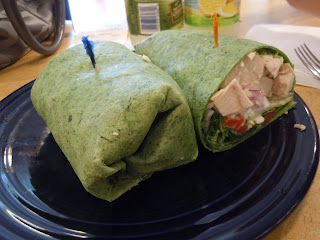 The special consisted of chicken with roasted red peppers, red onions, cucumbers, tomatoes, and greens with dill feta dressing on a wrap.  The dressing tasted more like blue cheese than feta but it was still delicious.  Also, they don’t put very much dressing at all so its subtle and not swimming.  I got the spinach wrap.  Overall, I was happy with it!  But I knew I would be because everything they serve is amazing.  There salads are HUGE too.  This sandwich was $7.50 so a little pricey (it is in a nicer neighborhood too) but so worth it.  I only ate half and was satisfied.  Can’t wait to have the rest tomorrow!  I definitely think I need to make an effort to stop here more often too!  Oh, they also do party trays and such just in case you need something like that!

One thought on “Local Eats: Cheese Board”