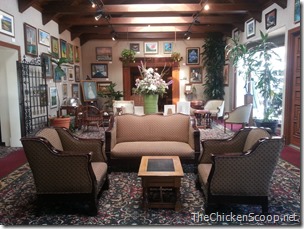 My third and final installment for this year’s Atlantic City Restaurant Week is The Ram’s Head Inn.  This is one of my favorite restaurants in the area, so much so that I got married there!

This is definitely on the higher end of my restaurant budget but comparable to Steve & Cookies with entrees in the $25 – $40 range.  It is also a dressier place, suggesting that men wear a jacket for dinner.  Since we were going for lunch, I snuck in wearing black jeans.  They seem to be a little lax on the dress code lately anyway, probably just to get customers in this economy!

The building is an old house and every room has a historical feel.  My favorite thing is all the fireplaces around the restaurant.  Of course, we didn’t get to sit in any of the rooms with a fireplace! 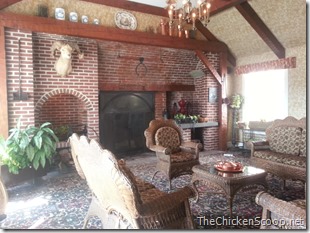 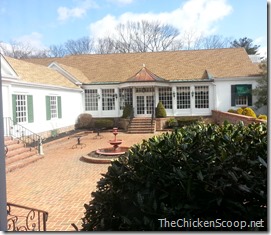 We sat in a room that had a sort of Asian theme.  We weren’t really sure about the décor but it was the best lit room in the restaurant from the sky lights, so it made for great photos.  Maybe after I let out I was blogging about the restaurant, they did it on purpose?  LoL. 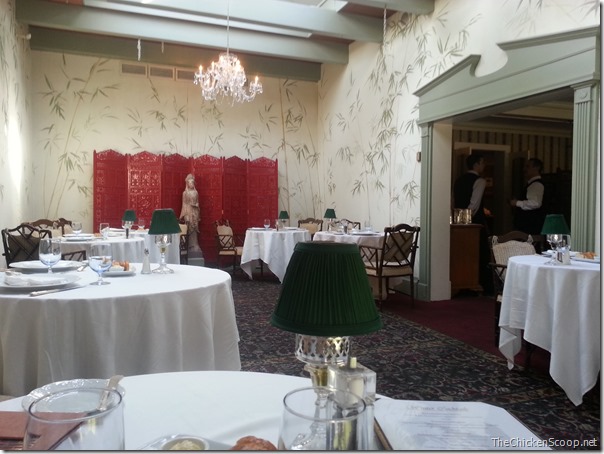 We ordered some wine with lunch and munched on the toasted bread already on the table topped with the fresh whipped butter. 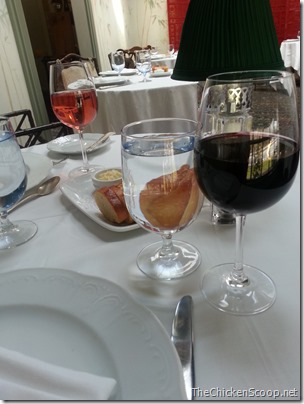 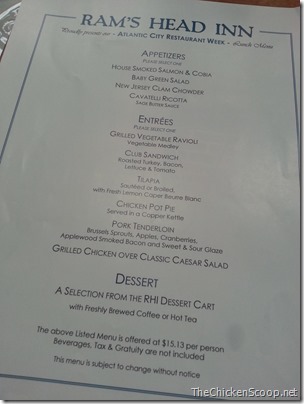 For our appetizer, we both ordered the New Jersey Clam Chowder which was delicious!  It was a cream based chowder like New England but had tomatoes in it which gave it a great flavor.  It just tasted like delicious, fresh, Jersey tomatoes.  I would definitely get this again even though it pretty well filled me up, and I wasn’t really hungry for lunch then! 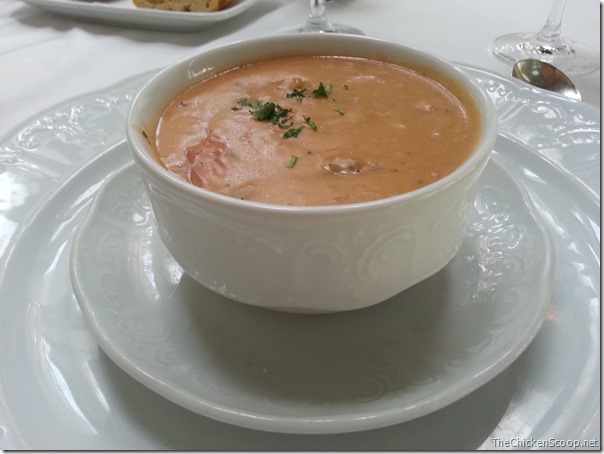 For entrees, I ordered the Chicken Pot Pie, which is one of their signature dishes, and my sister ordered the Pork (hm, see a theme this week?).  The Pot Pie comes in a copper pot which is then served at the table. 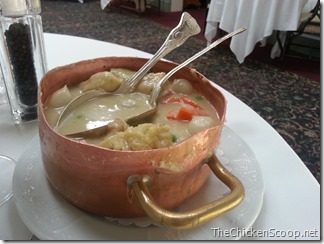 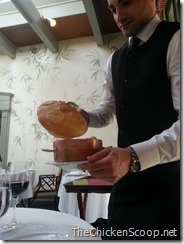 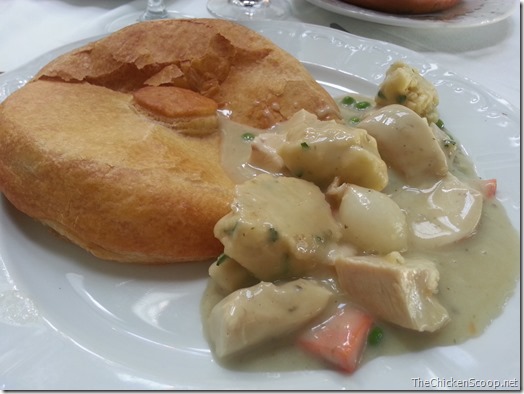 The pot pie was very tasty!  It had large chunks of chicken, carrots, onions, and dumplings.  The pastry was very light and had great flavor too.  The cream sauce was a little thick for me so I just tried to avoid it as much as I could but it had a good flavor.  Also, I had this for a total of 3 meals because it was so large.

The Pork Chop was even better.  It came with cooked brussel sprouts and apples.  I love cooked apples with pork so this is heaven on a plate to me!  Definitely worth it. 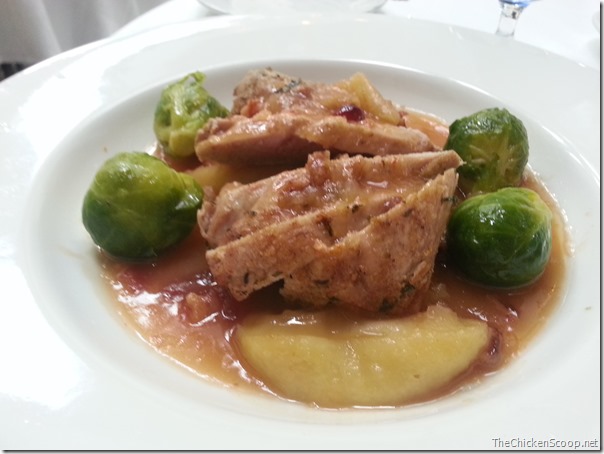 Finally, the dessert cart.  Seriously, look at this thing!! 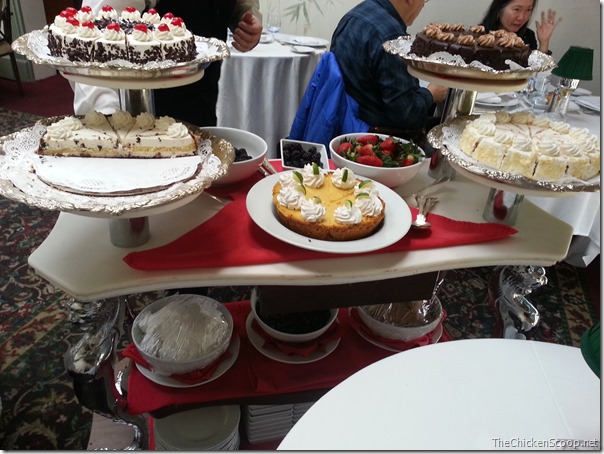 We had plenty of choices – Key Lime pie, Strawberry Shortcake, Chocolate (something special) Cake, Tiramisu, some other crazy delicious sounding cake…  AND fresh Chocolate Mousse, and Fresh Whipped Cream with Grand Marnier – both of these were topped with fresh berries.  Michele went for the Key Lime Pie while I got the Whipped Cream with berries.  We also got coffee. 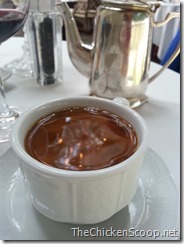 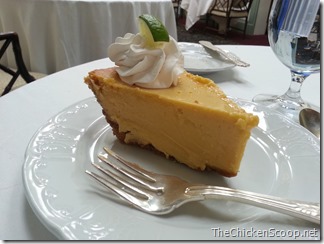 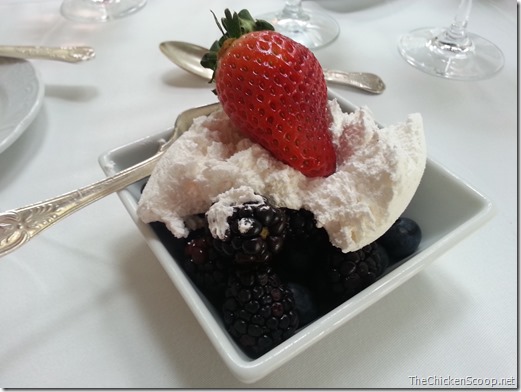 The Ram’s Head Inn is always a pleasant experience for me!  The service is amazing – attentive but not overwhelming.  The food is just amazing every time.  Even a basic steak dinner tastes way better here than other restaurants.  Rob and I usually go for our anniversary since it has such a nice vibe to it also (romantic?).  They also have a great happy hour and can be a fun place for a fancy Girl’s Night Out.  If you are in the area and want a special, relaxed dinner in a more traditional setting (verses the super modern restaurants in Atlantic City), then this is the place.  Only a few miles inland, its definitely worth the short drive!

One thought on “Local Eats: The Ram’s Head Inn”