This past Saturday was the annual Pedal Paddle Run in Absecon, NJ.  I don’t know how long they have been doing this race but I heard about it last year and knew I would have to participate one year.  Well, this was the year! 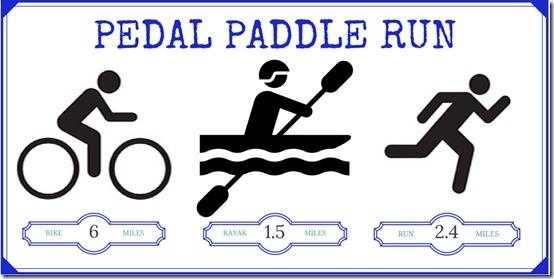 The day started out easy enough.  No wait, I lie.  The day started out with my alarm clock not going off because I set it wrong.  Luckily Rob and I had great internal alarm clocks and we realized this little mistake with plenty of time to go.  I was out of the house by the original time I wanted and I didn’t even have to rush.  It helped that I had laid everything out the night before: 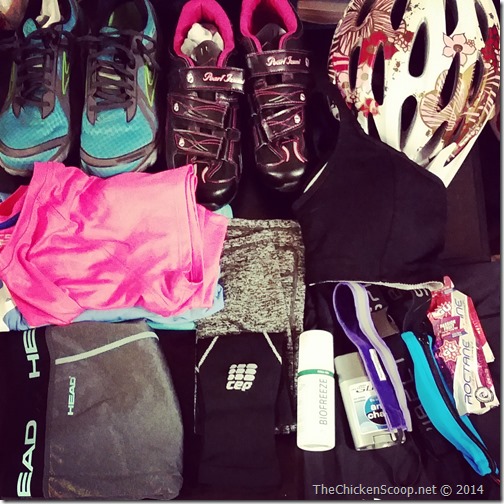 I drove directly to the transition site before registering at the start line.  We had received no emails with directions so I was just winging it.  My friend, Brian, who was also doing the race called with questions and they were very helpful at least.  So I headed over there, picked out my rented kayak, and put my running gear inside the kayak.  Luckily Brian was there and had a plastic bag for my to wrap my sneakers so they wouldn’t get wet.  The bike checkpoint wasn’t set up yet so this was my only option!

I headed over to the start line and parking was just along the road.  This is a very small, local race so parking in the neighborhood around the park was no big deal.  I actually parked right next to the finish line.  I went and registered and picked up my number and shirt. 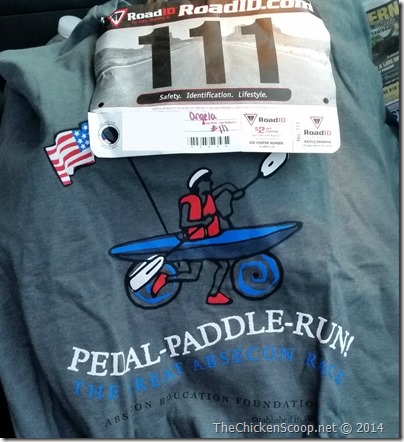 Then I just hung around, waiting to start.  I used the bathroom a few times and there was no line, even though there was only 1 port-a-potty (see, small race).  Rob came out to see us off even before he had to leave for an away rugby game.  Brian and I lined up with the Ironmen/women and we were off! 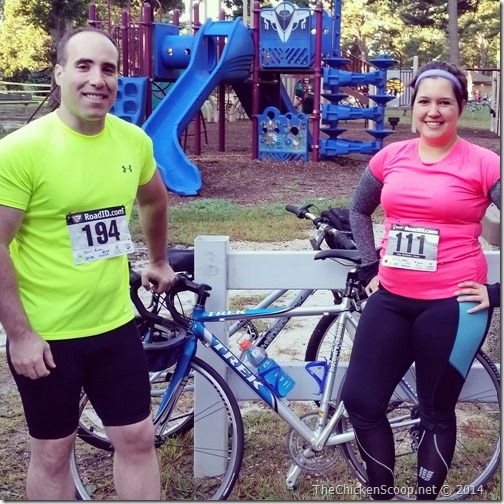 I had a really tough time on the bike part.  I was just riding a regular hybrid bike I got at Sports Authority.  No road bike here!  It was a good thing for when we hit the off-road parts but I was really dragging.  My legs were burning and I was getting passed by everyone.  Literally.  All but 2 bikers passed me.  I was really not into the race, mentally, at this point and I was only in the first third.  I don’t know if it was a lack of training here (totally possible) or a crappy bike (again, possible) or both.  We’ll just move on… 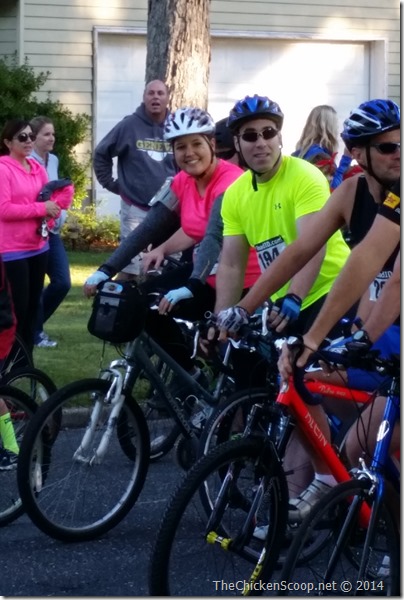 I didn’t train to kayak.  I practiced one with Brian and went about 3/4 of a mile and it wasn’t too bad.  I was really feeling down mentally though by the time I got to the kayaks, knowing I was so behind everyone.  I just felt alone and defeated.  I had a hard time getting in my kayak and a guy standing there waiting for his teammate (you can do this as teams) made fun of me which didn’t help.  He was just joking around but I was just not feeling it.  Anyway, I finally got started and it was slow going.  It was out and back which I actually liked.  My arms didn’t burn too badly.  I just seemed to be padding forever and it got really lonely out there on the way back because everyone else was already on their run.  I just wanted to stop paddling already!  At least the view was gorgeous! 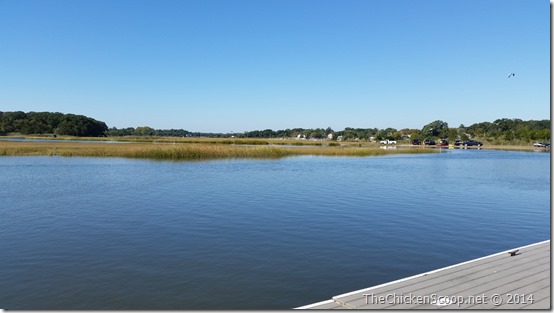 Before moving on to the run, I had to get out of the kayak (I didn’t flip only because someone was nice enough to help me up!) and make my way around to the bike area.  I grabbed my not-wet sneakers thanks to the plastic bag and started to head over to grab water and change my shoes.  On my way, both of my calves cramped up and brought me down!  Oh the pain!  I was even wearing compression sleeves but I guess they were angry about biking as hard I could for 6 miles and then sitting for the next 30 minutes.  I was also having hip cramps in the kayak but with no way to stretch because I would tip over.  This wasn’t exactly a pain-free race.  Moving on!

The last part was actually the easiest!  I thought it would be super hard but my legs got a break during the kayak (even though hip cramps were rampant!!).  I was still feeling rather defeated though, especially since the final person passed me during the run (who was a little kid) and I was officially dead last.  It was really quiet and lonely and I wasn’t mentally into the whole thing.  I just kept moving though and there were some awesome volunteers on the course who cheered me on and made me feel better.  I almost thought I took a run turn too so that made me panic a little but I kept going and finally saw a sign for the race.  When I reached the 1/4 mile mark (the only marker on the entire race), I couldn’t believe it!  I thought I still had at least 1/2 mile to go so I was pretty happy. 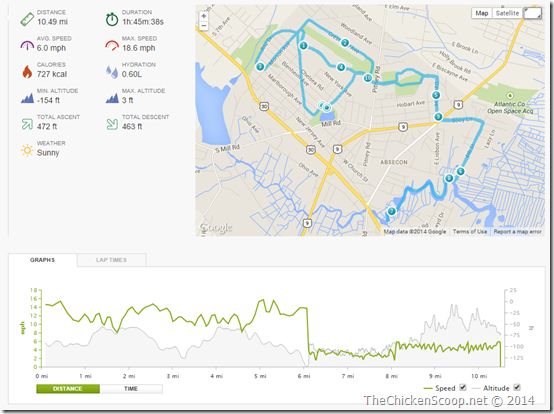 I used Endomondo on my water-proof phone

I got a surprise at the finish line where my mother-in-law (with FIL) was cheering me on with a sign!  That definitely made my day! 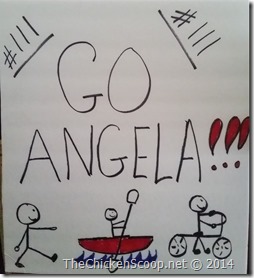 The volunteers at the end were also pretty awesome at congratulating me on finishing all by myself.  (Remember, there were teams too.)  We hung around to listen to all the winners in each category and then headed out so I could get to rugby.

So there were some really cool things about this race: 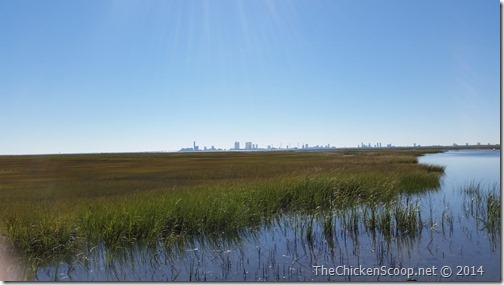 Seriously, did I mention the views?

Really, there isn’t much bad to say about this race!  And even though I had a terrible time during the race, I really enjoyed the fulfillment of completing it and can see myself doing it again in the future.  I think it would be much more fun if I had done it with a friend that would race alongside me (not as a team but two ironwomen!).  I think I just wasn’t in race-mode that day and that just can’t be helped.

On a side note, I was thinking about dropping down from the Philadelphia Half Marathon to the 8K.  The cut off date is tomorrow and I was contemplating this while I raced on Saturday.  I wasn’t having fun and if it isn’t fun, why bother doing it?  Should I do the half marathon?  Would I be just as miserable for an even longer amount of time?  I’m doing that race alone too so would I feel just as lonely even though I’d be surrounded by thousands of other people?

So the conclusion I came to was that I would stick with the half marathon in November.  I have just enough time to train for it and I really felt satisfied after finishing on Saturday and would be disappointed in my myself if I switched to the 8K.  I know I wouldn’t train for it like I should, and it wouldn’t be any more or less fun than the half marathon because I’d still be running by myself.  So I’m sticking with the full 13.1 miles.  I’ll have a better attitude that day, I promise!

Have you ever done a race where you just weren’t feeling it?
I mean, more races aren’t like all happy-go-lucky but this was really a test on my mental fortitude.

Have you ever come in last?
First time for me!  It is more likely in a small race like this.  I’ve been close to last at larger races too though.  Gotta just keep training to get better and faster!