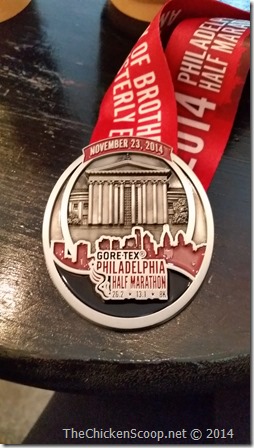 Today was the big day!  The Philadelphia Half Marathon!  This was my first time running this race (I’ve done the Philadelphia Rock’n’Roll half before but not the city one), so I will try to talk a bit more about the details of the race.

I went on Friday after doing a quick stop at school for a weekly thing I always miss.  I was also picking up a school friend who wanted to go to the expo too.  It took us forever to drive across the city and we paid crazy amounts of money to park but we finally made it!

Packet pick up was super fast and easy.  You just had to bring your bib number with you, and I walked right up and got it!  Then there was a separate area to pick up your shirt.  Just had to make sure I went to the correct race table (there was an 8K, half marathon, and full marathon). 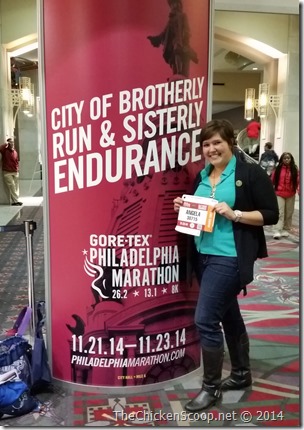 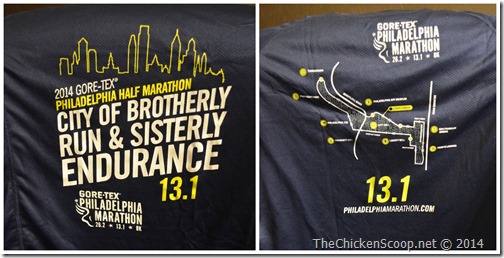 This of course lead you into the “Buy All Things Philadelphia Marathon” area.  I normally don’t buy anything extra because I had the free shirt but I really liked this one shirt with the turns on the back and picked that up.

Next we walked around all the booths.  I’ve been to this expo before because it is just so good, I go to it, even when I’m not racing!  All the usuals were there like The Stick, Gu, Hippie Runner, SweatyBands.  I got a ton of freebies from this expo! 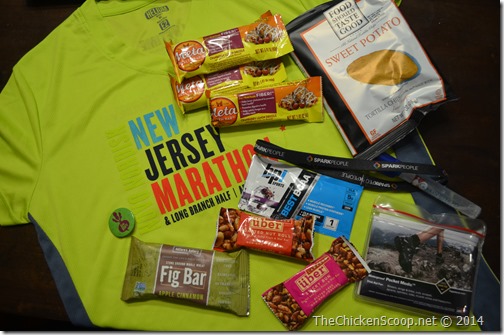 It was even more fun because Emily (friend who joined me) runs but doesn’t get into all the crazy stuff like me.  She was excited to see some of the gear.  We both picked up belts from Hippie Runner after I raved about mine.  I had 2 already but the pocket was too small for my new cell phone.  Well, they made the pocket bigger on the new ones!

We decided we were done and started to leave when I spotted a shirt on the backside of a display that I just HAD TO HAVE.  Just the other day, I was talking about how I didn’t get to train but I was okay with that.  Well, this shirt was just absolutely perfect for this race! 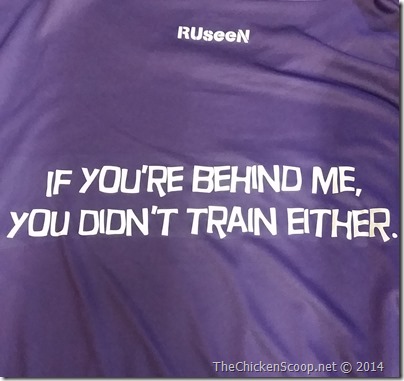 I wanted the bright orange but I also wanted a long sleeve which was only in purple so…  On race day, I had 22 people tell me they loved my shirt!  I could even hear some people laughing before they passed me and told me.  I am forever wearing funny sayings on the back of my shirts now.

After the expo, we headed over to Reading Terminal Market which is right across the street.  It is basically a giant farmer’s market/food court.  You can buy a ton of gourmet cooking supplies, raw meats, raw fish, fresh veggies, straight from the farm.  You can also eat your heart out while you are there.  Emily and I split a slow cooked roast beef sandwich and I also tried my very first French Macaroon (verdict: SO GOOD!). 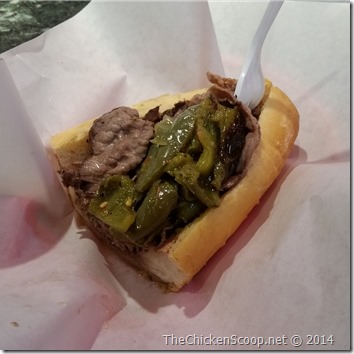 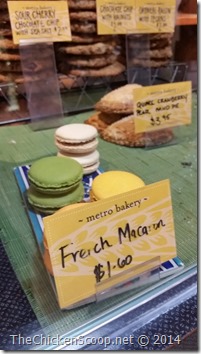 I also had a Café Au Lait with chocolate from Old City Coffee and picked up cookies for Rob and I at Famous 4th Street Cookies (best cookies ever). 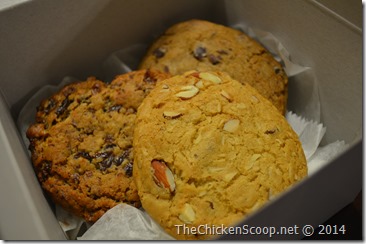 After we killed enough time, I headed out and didn’t hit much rush hour traffic at all!

We’ll skip talking about happy hour Friday night and being at the clinic and doing work all day Saturday and going to bed by 9.  That is boring.  But I did lay out my race gear Saturday night before bed.  I like to sleep in until the very last minute so this is a must for me! 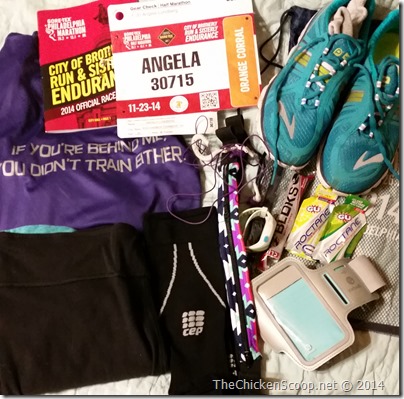 I ended up skipping the compression socks with capris and wore a pair of Athleta tights I had instead (questionable choices to be discussed ahead).  I also wore my arm sleeves under my shirt since it was really thin and it was only supposed to be 40 degrees for the race.

Because the race started at 7AM!  Uuugh, so Rob and I rolled out of bed a little before 5. 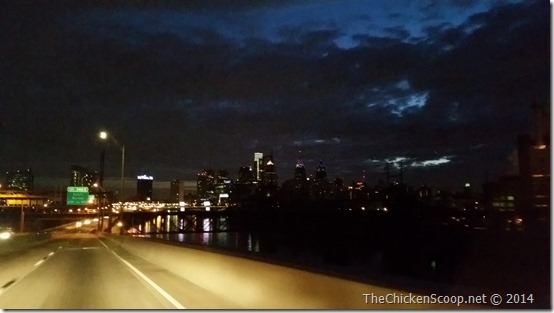 Too early for this!

We managed to get to Philly around 6:30 and I was worried about getting in the security checkpoint since the email from the race directors said to arrive by 5:30.  Well, we breezed right through!  And there was no line for the port-a-potties either!  Woohoo!  Great race start.  Then it was chaos trying to find the corral but it all worked out.  I had Rob snap some pictures. 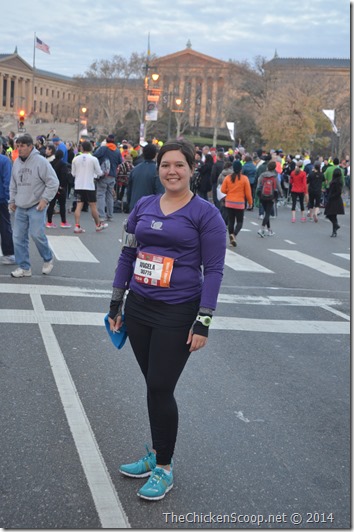 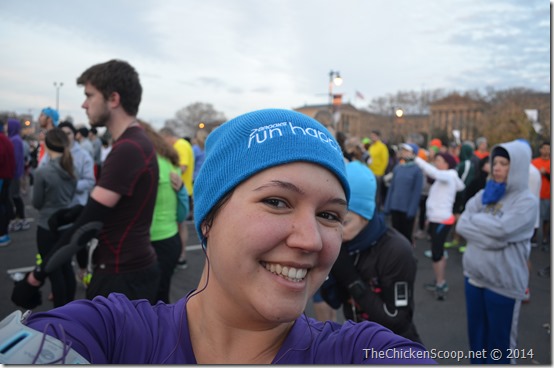 Aaaand I was off!  The route takes you through many of the neighborhoods of the city.  It is a great way to see Philadelphia honestly.  I didn’t realize how much I would love it!  First, we headed toward downtown and City Hall. 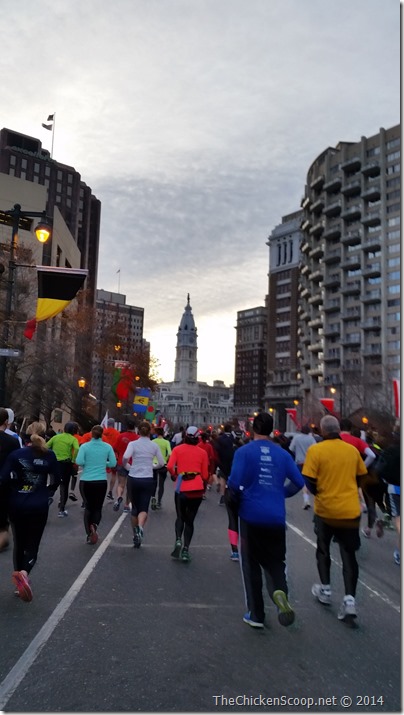 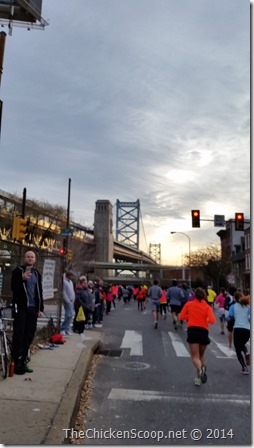 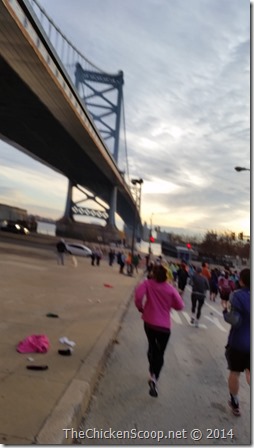 Then we turned and ran along the river for a while and through Penn’s Landing where we turned into some neighborhoods and I got to ogle all of the beautiful brick townhouses that Philadelphia has (sorry no pictures).  Then we turned up South Street (think partying district) 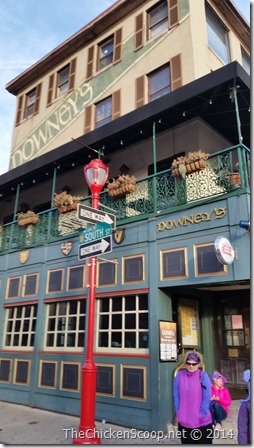 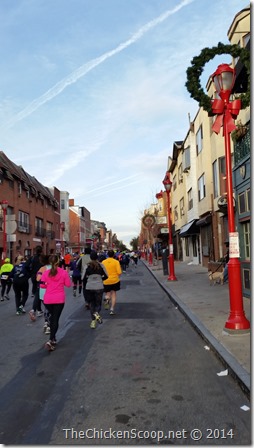 Then it was through Old City near all the historic sites (my favorite!). 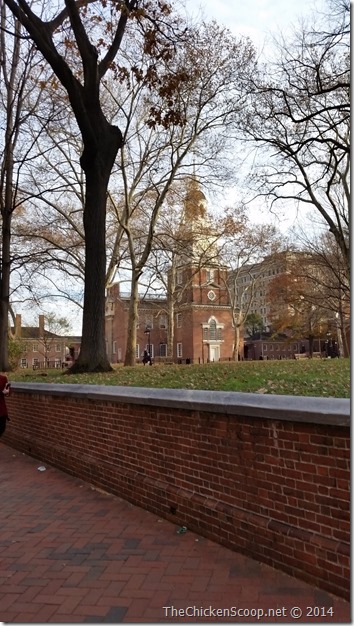 Then we ran up Chestnut Street through Rittenhouse Square for foreeeever which was actually awesome because it runs right across the city and there were hundreds of people out there cheering us on.  No pictures because I was enjoying myself.  Then we ran across the bridge into University City.  Sadly, we only ran on Drexel’s campus and not UPenn’s (my school) but it was cool because we ran by things I see every day like 30th Street Station (below).  Also, the houses on Drexel’s campus are amazing.  So beautiful and so old! 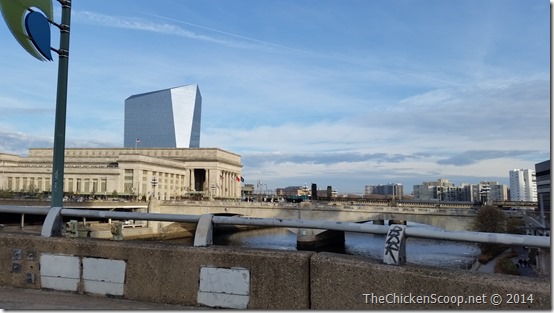 Then we ran along toward the Zoo!  But you can’t see anything

And into Fairmount Park, by the Please Touch Museum. 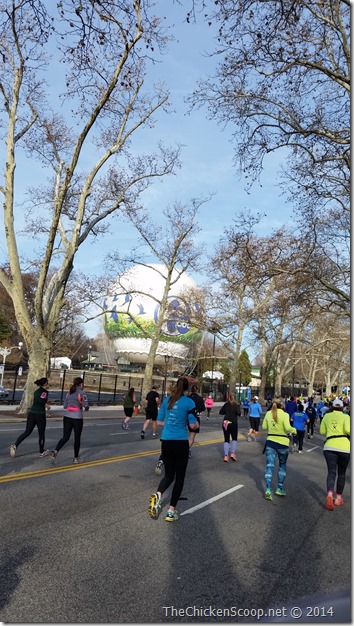 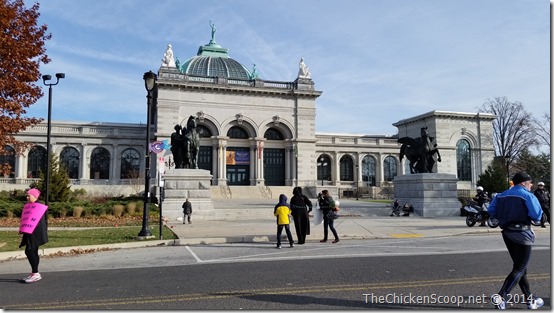 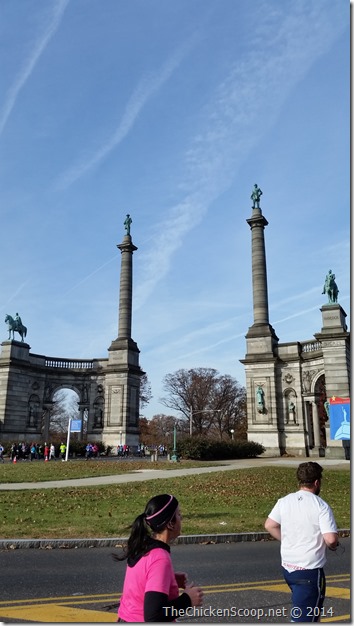 Finally, we headed out of the park and down to the Schuylkill River which runs along the west side of Philadelphia (hence the bridge we crossed earlier – if we crossed the Delaware River, we would have been in New Jersey). 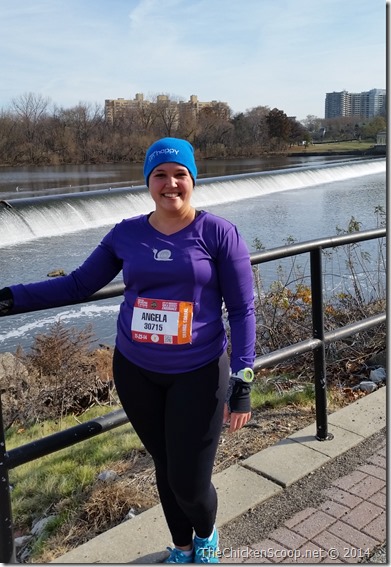 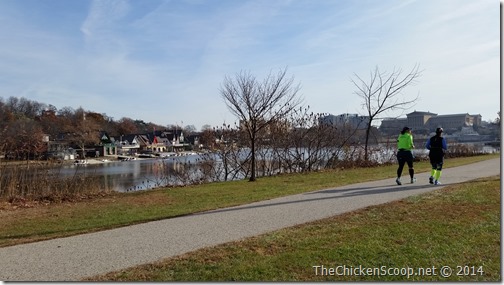 Finally, we started crossing back over the river into the city for the last half mile or so! 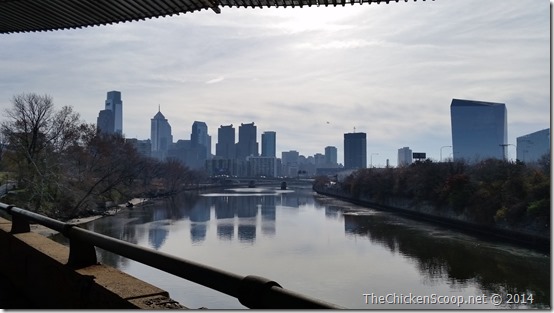 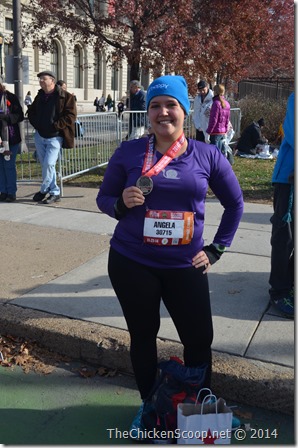 I had a great time at this race!  I loved that my name was on my bib because spectators were cheering like crazy!  I had lots of people yelling “Go Angela!”  (I tend to run to the side since I take walk breaks so people can see me).  It was so fun hearing your name!  And besides that, people were just awesome, cheering, holding signs, the works.  The only annoying people I met were other runners who cut me off by basically stepping on me.  The crowds were amazing!

I also managed to dress perfectly (I haven’t mastered this skill in general).  I wasn’t too cold or hot!  The arm warmers were a great idea and I even used the hand covers a few times.  I was worried my neck would be too cold and ended up with a bad cough after the race but I am feeling better now.  I was really glad I wore the hat and the tights too.

Well, the tights.  So rule #1 of racing is don’t wear anything you haven’t tested first.  I never wore the tights for more than 2 miles and I chaffed!  UGH!  But not too badly so I hope it will be gone quickly.  I also got a blister on one of my little toes.  I don’t think I broke these shoes in well enough yet.  They are relatively new and I’ve only worn them a handful of times.  Other than that, no wardrobe problems.

Starting out, I ran the first mile under 12 minutes because of all the excitement of race day.  I didn’t have a goal though so I wasn’t worried about negative splits or any of that.  I was out there to have fun!  My slowest segment was in University City and Fairmount Park because of all the freakin hills!  Otherwise the course was really flat and easy on the legs and I felt pretty good at the finish.  I mean, my legs were getting sore and I was tired but I didn’t have to drag myself across.  I ran and everything!

So basically, I would definitely be interested in doing this race again.  I really love Philadelphia.  It is such a nice, old city and I enjoy being in the familiar parts of the city plus seeing new things.  The route showed you all the important bits of the city and gives a great feel for the type of city it is, from the neighborhoods to the people.  Now if they would only not have it start at 7AM… 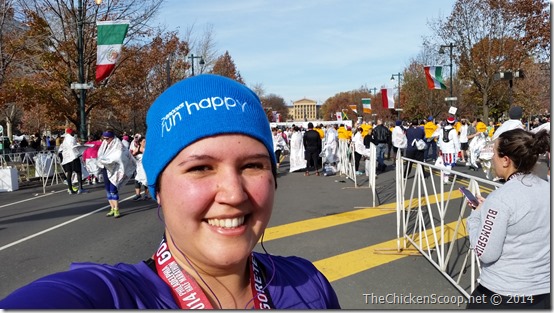 15 thoughts on “Philadelphia Half Marathon 2014”