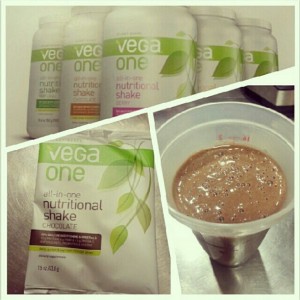 A few weeks ago, I signed up to get the Vega emails from a link that Colourful Palate provided with her smoothie challenge.  The bonus was that it included a free sample!  It came last week and I finally tried it this morning.

The sample was for their Vega One “all-in-one nutritional shake”.  Basically, it has a bunch of great things like probiotics, antioxidants, fiber, protein, vitamins, and minerals.  I had been wanting to find a nutritional shake so I was very excited to try this!

I whipped up my packet with 1 banana, some strawberries, and a little water.  The verdict?  DELICIOUS!  It was very chocolate-y but I loved it!  It was also not too sweet for me and had hardly an aftertaste like most protein shakes do (I have no other comparison). Even though I had it mixed with stuff, the chocolate was so overwhelming, I got a pretty good idea at how it tasted.  I give it 2 thumbs up!

Of course you know I can’t leave it at that without looking at the ingredients a little closer…  The ingredients are all-natural but I shot an email over to Lily (We All Shine One), my very-restricted-eater friend, and she sent back some interesting tidbits.  She pointed out even though this is soy, gluten, and dairy free, peas and sprouted-rice are not Paleo (their source of protein in this shake).  She also pointed out that they only use 2 probiotics whereas other drinks she has tried have 3-5.  They also don’t tell you what kind of fiber is in it, noting that certain types are indigestible.

If none of those things apply to you, then go ahead and try it! So far, I seem ok with it but it would have to take a second test with a stricter eating schedule to really see (I had leftover pizza earlier which will cause interference).  Otherwise, this stuff could be pretty addicting!  I also have a packet of their Energizing Smoothie mix coming the mail from Charissa at Colourful Palate from her smoothie challenge last month.  I can’t wait to try that either!  I figure, if I am going to have protein/smoothie shakes, pea protein is better than whey?  I could just have real food but honestly, who doesn’t like chocolate shake now and then?  🙂