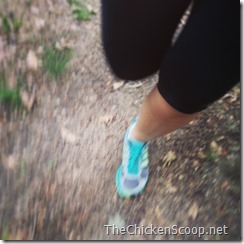 Today’s run did not go as planned.  I decided to go with timed intervals instead of distance.  I just picked a 2:1 ratio of running to walking and got started.  It quickly became apparent that it wasn’t going well, and I needed more walking than that.

After my run, I did a little quick math and figured out my time intervals from my run on Tuesday (when I ran by distance instead).  There were:

It is obvious that my recovery walks were not long enough today which lead to my burn out in the end.  The current plans I’m following (Hal Higdon Novice 5K) is just mileage so I’ve decided to switch it out for the Couch to 5K training plan (C25K).  This is the same plan I used in 2009 to start running and train for my first 5K.  The switch will take away one of my rest weeks between the 5K training and 10K training but that is okay because I had 2 weeks built in for rest.  Now I will have 1 week of rest instead.

Before, when I first did C25K, I didn’t have a fancy smart phone so I used the podcasts (which I really enjoyed!).  This time, I’ve downloaded the official C25K app which will tell me when to run and when to walk when I do my future workouts.  My run on Tuesday is similar to the training of Week 2 of C25K.  I don’t plan on jumping ahead but I will start with Week 1 Day 3 come my run this Sunday and continue on from there.

Now I just have to stay committed to the workouts.  I have not missed a schedule workout at Bullpen for the last 8 and a half weeks!  It hasn’t been easy but I just made a commitment to never miss a workout there.  Getting my running in is a bit harder since I don’t have anyone expecting me to show up nor do I have nice fresh legs since I’m doing the run in between my other workouts.  I’m a bit tired when I get on that treadmill but I have to get out there if I want to be successful.

This will be a good change and I hope it will make the transition back to running a little bit less stressful!  I can’t be trusted to decide my intervals on my own 😉