This weekend was yet another race!  I just can’t seem to stop registering for them!  Emily and I decided kind of last minute to register for this one and we are totally happy we did!  We had a choice of 3 races:  5K (on Saturday), 8K, or half marathon (both on Sunday).  We decided to go with the 8K since we didn’t feel like running long and Rob has rugby on Saturdays. 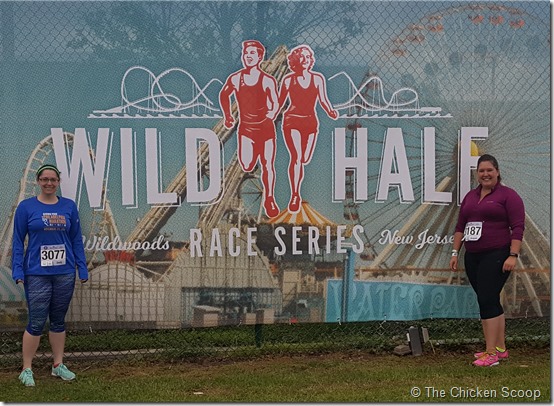 Emily and her boyfriend came down Saturday and we headed to the expo, which was held from 9:30am to 5pm at the Wildwood Convention Center.  It was very easy to get to and there was free parking if you told the attendant you were there for the expo (you had to park in the short term parking so don’t think you could just leave your car there!). 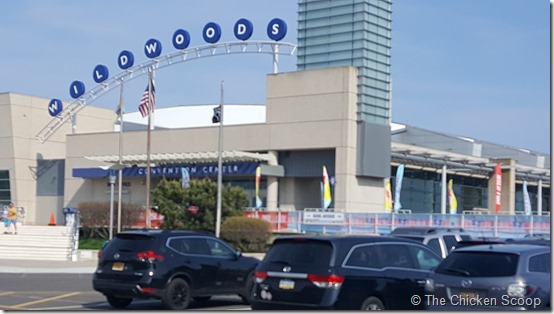 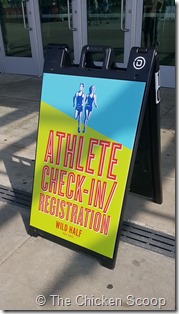 Sign-age was on point and everything was easy to find.  We headed in and they had everything set up at the end of the hall.  A lady scanned my QR code that was emailed to me and she confirmed with my ID.  She wrote down my bib number and shirt size on a post-it note and I headed over to get my bib.  A nice young volunteer handed me a bag with goodies and a lady retrieved my bib for me.  I then headed to the shirt table and the person took my post-it note (to confirm that I collected my shirt) and got me my size.  They had both women’s and men’s shirts.  Usually I am pretty excited about having women’s cut shirts, but at my size right now, even the XXL wouldn’t fit me, let alone the XL I ordered (yet the L from last week’s April Fool’s 7K fits fine! – I hate race shirt sizing!).  Even Emily said her shirt was really small.  There was no option to exchange shirts so we just moved on. 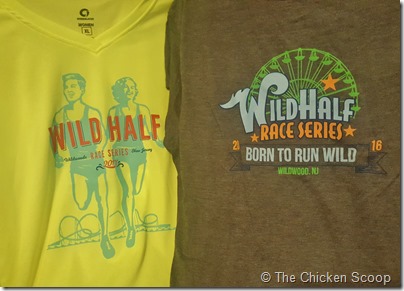 We decided to look at the vendors because I dressed very poorly for the boardwalk (it was in the 80s that day!  In APRIL! Not normal for here).  I tried finding a cheap tank top to wear but the running store they had didn’t have anything for women above a large and the Wildwood stuff wasn’t exciting me.  Don’t get me wrong, they had great, high quality stuff, but the women’s shirts were once again really tiny and the new logo said Wildwood HALF really big, and I felt dumb buying that because I was only running the 8K.  I did end up buying 2 shirts from the leftover 2016 stock that had “Race Series” in much more prominent view.  I do have to say, I LOVE the color of the finisher shirts though(hello yellow!)

While at the expo, we also picked up our pre-ordered friends and family piers tickets.  You see, the race comes with weekend access to Morey’s Piers, a collection of piers that include rides and games in Wildwood.  I was able to buy Rob a discounted pass in advance.  After we all had our packets, we headed back to the car to drive closer to the pier (Rob has a bum knee so we were trying to minimize walking, plus remember we were in the short term parking lot).  Street parking is free in April so we just drove around until we found a spot and headed to the rides!

Before I forgot, one thing we missed because of rugby was the yoga on the beach!  At 4pm they had a yoga session for the pre-half marathon stretch.  Next year, I want to make a point to do to that!

Anyway, we only went to one pier and on a few rides because we were all really hungry.  I’m not sure the other 2 piers were open but the main one was.  Emily put aside her fear of heights to ride the GIANT ferris wheel with me.  It goes nice and slow so it wasn’t all bad! 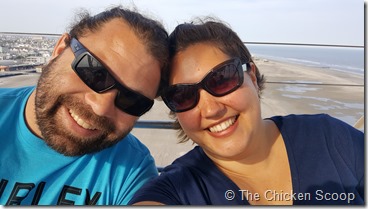 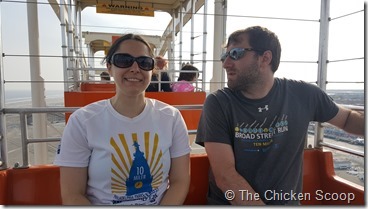 After a few rides and some not-curly fries from Curley’s Fries – DO NOT BE DECIEVED LIKE WE WERE! (but get the cilantro dipping sauce, it was delicious) – we decided to head back toward home to get dinner and go to bed at a reasonable hour.

Sunday morning, we arose at the crack of dawn because the race was scheduled for 7:45am!  The half marathon started at 7:30.  I’m about 45 minutes away so we had to leave pretty early to get there on time and find parking.  Once again, we’d be going with street parking for race day.  We ended up finding a spot only 2 blocks away from the start line/finish area.  We stopped at a Wawa on the way to pee but that was unnecessary as there were plenty of port-a-potties for the event. 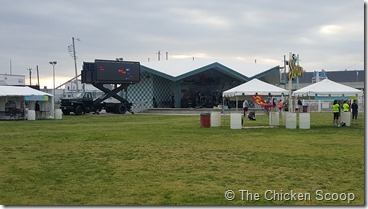 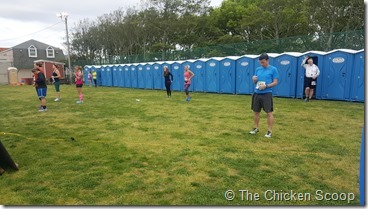 We noticed a HUGE tent with hot plates in it and I wondered what they could possibly be serving.  I would soon find out…

The race is a nice small local race.  I should have looked around more because there were apparently people there that I knew.  LoL.  So, the half marathon headed out and then we lined up to go.  A short countdown and we were off! 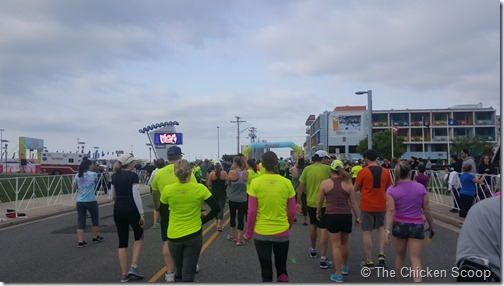 Emily decided to stay with me and do my walk/run since she is running the Broad Street run this coming weekend – she wanted to save her legs.  James started out with us for a while but eventually decided to run ahead.  One of the shops on the boardwalk was outside handing out COTTON CANDY.  It was surprisingly refreshing while jogging and just what I needed, as my breakfast wasn’t really big enough. 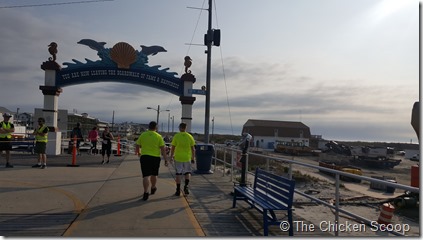 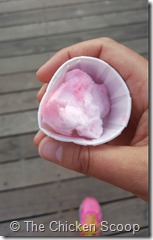 It was an absolutely perfect day for running, maybe even a bit warm, but the ocean wind kept us cool for most of the race.  Emily actually got really cold after the end of the race so a long sleeve shirt was a good idea.  We kept trudging along and eventually there were a significant number of 8K runners going back to the finish (the route is out and back).  We didn’t seem James and were getting really close to the turn around when we spotted him on a bench!  He got bored running by himself and just sat on a bench until we found him.  Haha!  Now all three of us back together, we kept going…

The route was pretty simple.  Mostly boardwalk with some sidewalk and tons of beach views.  I was pretty entertained by the sights the entire time.  I wasn’t thrilled with the boardwalk boards.  A lot of the boards need to be replaced and were kind of wobbly.  There is also a concrete area on the boardwalk where the infamous tram cars drive so you had the option as well.  We alternated quite a bit between boards and concrete.

Just as we were finishing, the two women in first and second for the half marathon came in the shoot as well.  We stepped to the side to let them pass.  It was a battle to the finish and the 2nd place girl eventually just edged out the other girl to finally take first.  It was pretty crazy!  And here’s our free finish line photo (another perk – free photos with this event!!!): 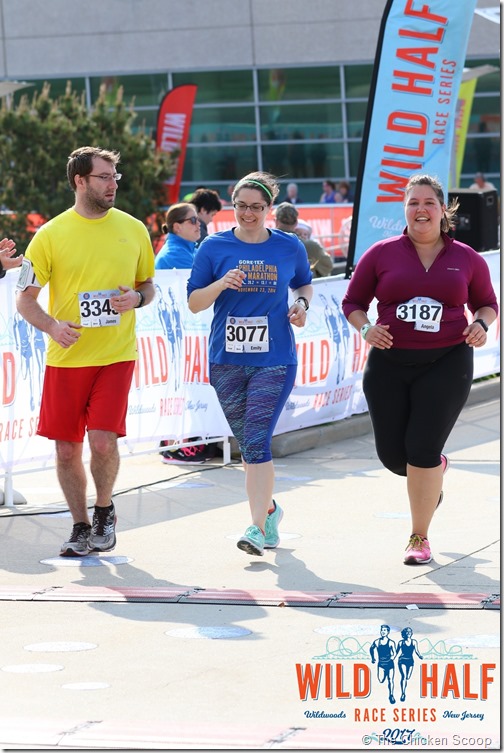 We headed to the finish area and found out what the giant tent was for.  All. The. Food! 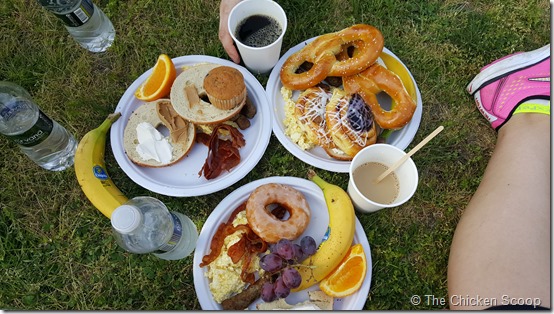 We had our choice of eggs, bacon, sausage, bagels, philly pretzels, pastries, fruit!  Coffee, lemonade, and orange juice.  HOLY EATS!  I would do this race again just for the finish line food alone.  I love being able to chow down on some real food after the race.  Usually I am trying to leave as soon as I can to get something “real” (i.e. protein) to eat so it was nice to sit and relax.  We listened to the rather decent 90s cover band that was playing and just hung out.

Also included was of course 1 free beer.  Cape May Brewing Company was there and we had a choice from 4 of their brews.  I remember at least 2 IPAs (I don’t really like IPAs, can we get over that trend already?) and a summer and one I can’t remember.  We went with the Summer which was also hoppy like an IPA but also fruity.  It was rather delicious after a race and I enjoyed every sip! 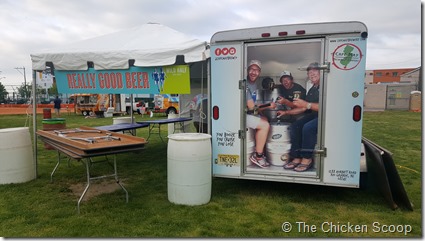 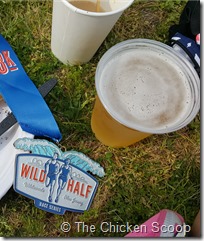 After that, we walked down to the Wildwoods sign, about 2 blocks away, and took some pictures. 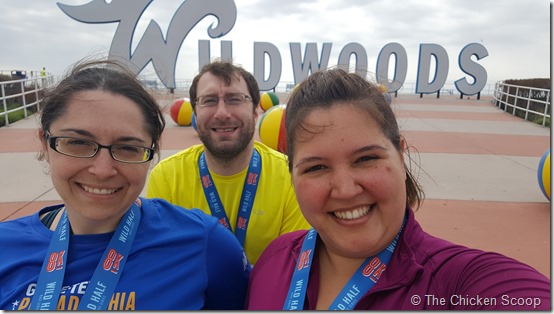 James hates this whole running thing so much. LoL

We were done at the point.  We could have gone back to the pier since we all still had on our wristbands but we were pretty tired and they had to get back home.  There was a Dunkin Donuts that we ran by on the boardwalk so we headed to that for some coffee, and then made our way back to the car and home.

This race was so well organized and nicely done for such a local event!  It had the quality of the bigger races I like to do but still had the nice small playing field and quaintness.  The perks that came with registration with top notch – the passes to Morey’s Piers, the free race photos, a free beer, great race refreshments, a super cute shirt, and an awesome medal.  They also have a challenge where you can do the 5K and 8K/Half Marathon so that’s another fun thing.  The race is nice and flat being at the Jersey Shore (the half marathon has at least 2 bridges so be aware of that!) and I think next year, we might even get a hotel room in town just so we can hang out and be right there for the race.  Make a weekend of it!  I am definitely going to run it next year.  Oh, FYI registration is already open for 2018!  >> WildHalf.com  Maybe I’ll see you there!