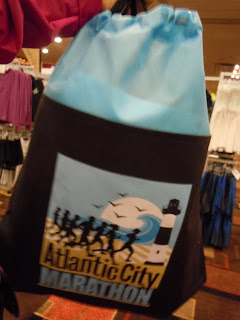 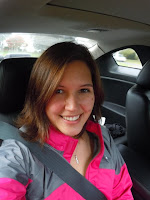 (Oh I dressed all sporty for this expo because last time I didn’t and Brooks was there checking your stride!  Doh!) 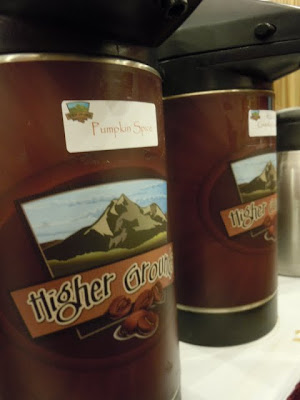 First up was Higher Grounds Coffee Company!  I know, coffee?  Well, every year they roast a special AC Marathon blend.  This year was an Acai blend.  We didn’t try any but I tried the pumpkin spice and O.M.G.  I drank a whole cup… black.  Now, let me tell you I never drink black coffee.  Ever.  It was amazing!  We were bummed though because he didn’t have any whole bean (we use a french-press).  Well, he took our names and is going to have a fresh roasted bag for us at the race on Sunday!  He said he’ll even make customized labels.  He was saying that if you order some online as a gift, he will video record a personal message and record the roasting process of the actual coffee he said (they roast 1 lb at a time only so it has maximum freshness!)  Then they email that video to the person on the day that the coffee is mailed so they know they are getting it!  How cool!!  And I have to say I really loved this guy.  He seemed very passionate about his company and was just so overwhelming nice and awesome (he is bringing us special roasted coarse ground coffee on race day!!!).  Definitely check them out!!!  (Best part for me is that they are local!  Even better!) 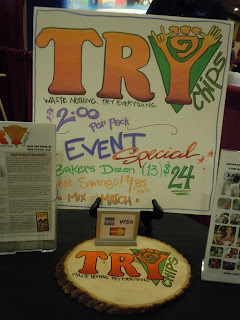 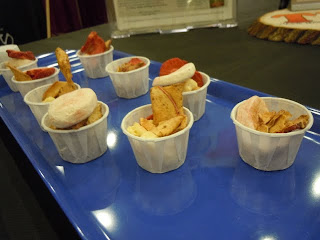 Next stop was Try Chips.  They had samples of basically air dried fruits and oh wow was it good!  They are all natural and all about efficiently fueling your body with clean, healthy foods.  Typically I don’t like air/freeze/etc dried fruits but this stuff was delicious.  It didn’t have that strange space-food texture.  Best part is that each huge package is only 100 calories.  I bought a case of 13.  Ha! 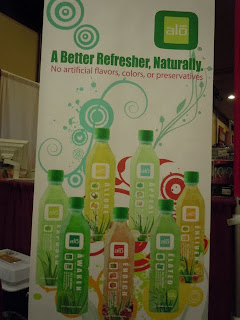 Next, we tried some ALO drink. (This guy asked me if I had business cards for my blog.  DOH!  On the to-do list…)  Anyway!  It is a drink based on the aloe plant obviously.  They say they use the inner leaf (“unlike other companies”) for optimal nutrition.  My meak determination?  It tasted pretty darn good.  Only slightly sweet.  I only tried 2 different flavors and opted to just get 1 bottle of the original.  I don’t drink juice too often so I didn’t want a whole case.  This is definitely something I would like see hitting store shelves though!  They are apparently from California I think and are trying to spread in the South Jersey area right now.  Their website has a list of locations where the product is available in the SJ area.  FYI, I found it online for sale via google.  Amazon has outragious shipping for it but it is available at Vitamin Shoppe!  Definitely worth a try.  It might even be a decent workout drink (for the sugar and slight flavor).  I will have to investigate this… 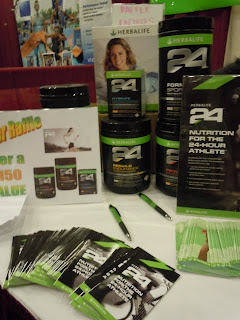 Herbalife was also there with their 24:  Nutrition for the 24-Hour Athlete line.  I’m always wary of products like this but I do like using enhancement stuff for my running and workouts as long as its all natural, which this stuff is!  They had a sample of their hydration mix (electrolytes) and it was pretty good!  I tried asking questions but they weren’t giving me very good answers.  I don’t think they knew much about the products so I will have to look more at their website.  Anyway, if you like using supplements for workouts, this might be something you could look into, especially since its all natural (I will check that more in depth too!).  And what’s even funnier is I had seen a FabFit friend post about them earlier today! 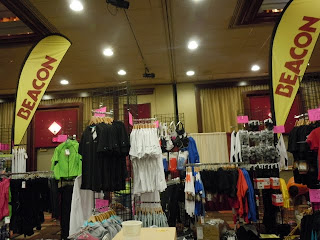 This is the stand for our favorite local bike shop Beacon Cycling and Fitness.  Recently, they added a very large running section to appease the local athletes!  Their store isn’t exactly cheap but they carry great products that cater to endurance runners.  Oh, and lots and lots of flavors of Gu (and they just got Honey Stinger products too!)  The guy I think even recognized us there.  Ha! 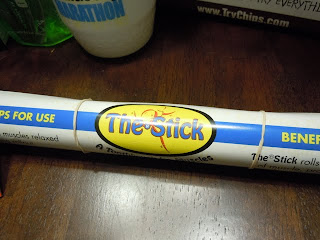 The Stick was probably my favorite thing at the whole expo.  I’ve heard great things about Tiger Tails but I never really was that impressed by them myself.  I never liked the foam.  The Stick is made out of plastic with a bunch of little sections.  It is flexible to bend around muscles.  They have multiple rigidities so you can buy one that suits you best (we got the stiff).  The guy selling them was just so animated and fun. I think he was just excited to chat with someone.  He even told me that he does a running club out in Philly and gave me the website so I could come out once in a while (SO EXCITED about that!)  So anyway, this thing is amazing.  I told Rob I don’t need him any more.  I have a serious problem with shoulder knots and this thing works wonders.  It is really supposed to be used after endurance events to reduce delayed muscle soreness.  A lot of people say (who use these and tiger tails) that they don’t have any soreness the next day.  I figured it was a good investment with marathon training coming up!  Or you know, just for a nice massage! 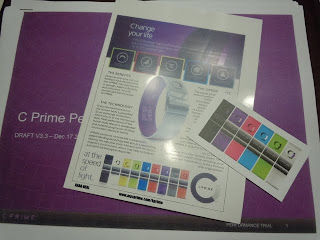 Then there was the token weird thing at the expo.  It was called C Prime.  Its a bracelet with an “antenna” in it as she called it.  Think of those commercials where the people get pulled on and they fall over and then magically when wearing the bracelet, they don’t.  Well, this is apparently totally different “technology”.  Rob and I are extremely skeptic but we played along (but we weren’t easy on her at all!!!)  Anyway, Rob refused to try but I played along.  She had me just hold the bracelet in my one hand and a short pole in the other hand.  She pushed down on the pole and I had to resist.  Well, sadly, coming from a huge skeptic… I think there may have been a difference!  OMG I know!!!  Who is this??  But at $50 a pop, I did not purchase one… But I’m seriously thinking about putting it on my Christmas wish list!  She had a bunch of stuff she gave me.  It is supposed to help with overall fitness, not just “balance”.  Have any of you ever tried this type of thing??  I’m really wondering if its just all in your head or now.  But She had me do it more than once (with and without the bracelet obviously) and I performed much better holding the thing than not…  Weird. 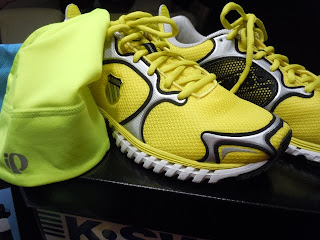 So that’s pretty much all the interesting stuff I saw!  I got some new sneaks for serious marathon training.  Can’t wait! 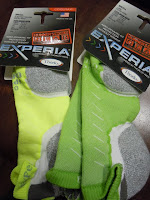 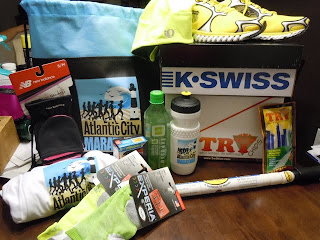 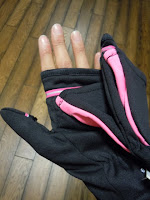 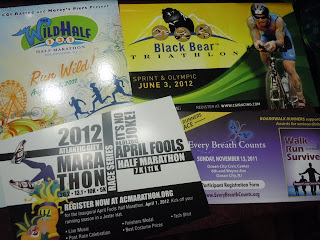 I have been wanting these running gloves with the mittens for over the fingers.  I also got some socks and lots of flyers for local races.  I am thinking about doing the Lung Cancer one and definitely going to do the 7K or 11K April Fool’s Day Run (how funny is that!?).  There was a flyer for a triathlon too!  Exciting!!!  Anyway, had an awesome time at the expo.  It was on the smaller side but made up for it with quality booths!  I hope they keep it up next year too!