This weekend was such a whirlwind as usual!  Not only did I (and still do) have tons of work to do but it was the first official Rugby game of the season (last week was a tournament) and I had a race!

The rugby game went well!  There are a lot of new guys on the team so they are working on “building” the team up.  Anyway, the weather was a little dreary but it held out for the whole day.  I got a lot of great photos!  Here is a Robert pile (he wears a purple under armor shirt under his uniform which makes it easy to spot him in photos) 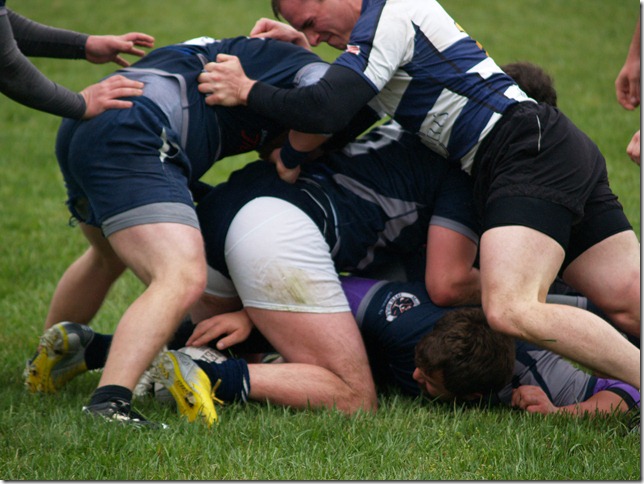 Rob also had a great run right in front of me with the ball and every picture came out blurry: 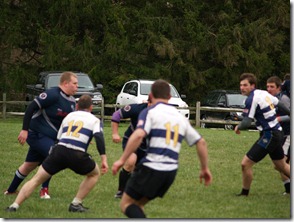 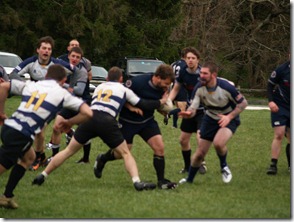 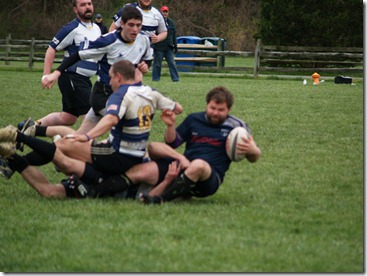 But anyway!  It was a good game and I am excited for rugby season!  Now on to Sunday!

It was supposed to rain but it turned out to be perfect weather for a race!  My friend Callista and I were doing the April Fool’s Day 7K which Lauren and her sister Shana were doing the 11K 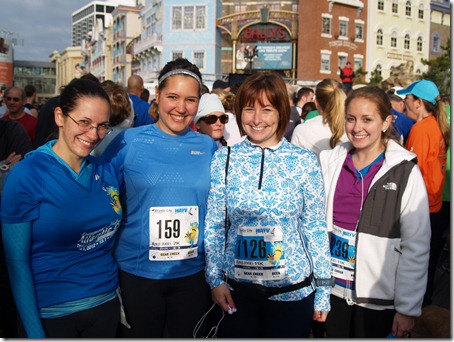 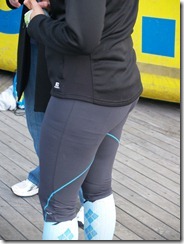 Apparently blue was the color of the day.  Oh and check out my socks!  I didn’t get a picture of them directly but Rob loves butt pictures so you can kind of see them.  They are compression socks I got on clearance and I love them!  Blue argyle!  Did they help with soreness?  Maybe, I can’t tell.  LOL.  They are fun to wear either way!

Overall, it was an awesome race!  I don’t know why but I felt super great (I ate a half a bucket of fried chicken the night before, new secret to great running?).  Callista is a fast lady when it comes to jogging but she just had a baby!  I know!  Running 4.3 miles and she just had a baby in January!  So luckily she wouldn’t blow me away but I was still worried.  We ended up really pushing ourselves, not doing any talking the last mile and came in with a pace of 10:11!  Wow that is fast for me!!!  I don’t know if I’ve actually gotten faster or if it was because I was really pushing myself.  Usually, I take it easier than that but either way, I am happy!  And for the first time ever, I had negative splits!! (that is when you run each mile faster than the last) 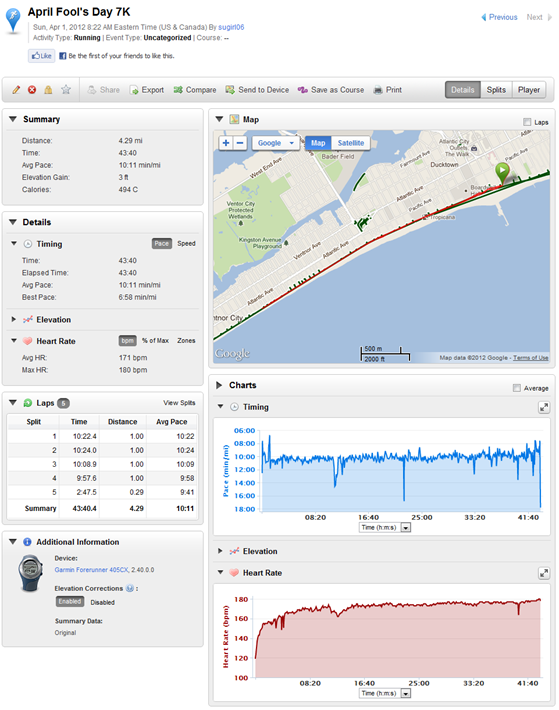 I think I really, really needed that break from running.  It felt great to be out there but it also felt good knowing that I would be going back to Insanity today and not running for a few more weeks.  Time for a change!  Then in May, its back at it!  Until then, I’m super happy with this race!!  And I have to say, I like the Atlantic City Marathon race series.  They are just well organized, always have enough supplies, everything goes smooth at the start/finish.  This year, they even had Johnson’s Popcorn (seriously famous, delicious kettle cooked caramel corn!) AND Rita’s Water Ice!  Best post race fuel ever!  Yum!!! 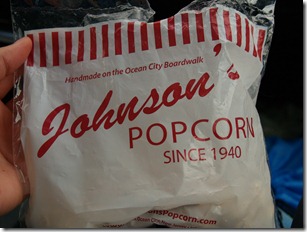 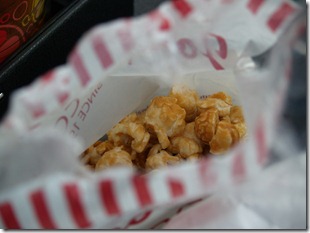 I am really bummed that I will be missing this year’s AC Marathon event in October but I will be running with two awesome ladies in St. Louis so it totally makes up for it!  But if you are in the NJ area and want to consider a race, the AC Marathon events are great!  There is a 5K, 10K, Half, and Full in October!

Well, time to be off!  I am writing on my lunch break between classes!  I have lots of work this week so I may be MIA for a few days.  I might start reposting old blogs from Spark People that were never on the Chicken Scoop.  What do you think?  Maybe some of the Food Showdown blogs need to come here?

Spooky Photo of the Week: 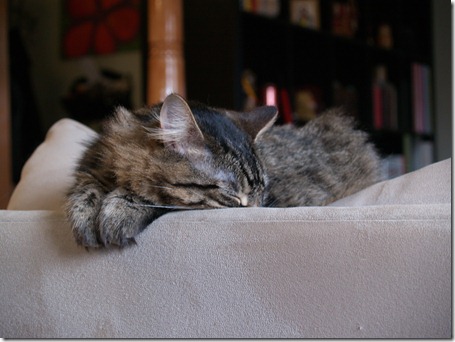