I had originally hoped to do a few chain pizza restaurants but had to settle for 2.  I could not find the ingredients for Little Caesar’s or Papa Johns (whose slogan is “Better Ingredients, Better Pizza”, ironic?).  I did find their nutritional information on their respective websites (Little Caesar’s, Papa Johns).  Instead, I settled on Pizza Hut and Domino’s since I could find both their nutrition and ingredients.  So here we go!

I decided to go with the Medium (12 inch) Thin Crust Veggie Lover’s for my choice since, as someone generally trying to healthy and keep a reasonable weight, that is what I would probably order! 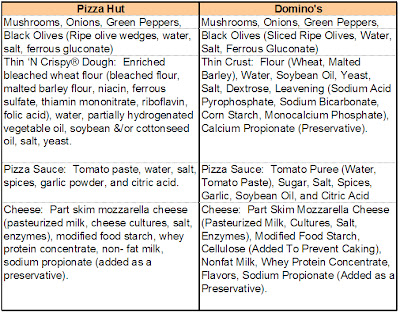 What do you think of the new display format?  Anyway!  Let’s see… the veggies are just veggies and the olives are no bigger to me really.  Ferrous Gluconate is often used as an iron supplement.  The MSDS didn’t have any information on toxicity.  Let’s skip the dough for now.  The sauces seem ok.  I would prefer the Pizza Hut sauce since it doesn’t add extra oil (especially soybean oil because I just feel like everything has soy in it so I try to avoid it as much as possible).  The cheese both seem fine to me.  Cellulose is found in nature.  Again, Sodium Propionate doesn’t have much info on it.  Let’s hope?

Back to the dough.  They both seem ok but there is one big giant red light.  Partially Hydrogenated Vegetable Oil!  (and more soybean oil too).  Pizza Hut, what were you thinking?  PHO for short is that evil trans fat you hear about.  Consumption of PHOs has shown to increase risk of all sorts of things like heart disease and high cholesterol.  We’ll see if this trans fat shows up in the Nutrition Facts!

Nutrition
If you decide to verify my information here, note that 1 serving at Domino’s for a medium thin crust is 1/4 of the pie while 1 serving of the same at Pizza Hut is 1/8 of the pie.  I have accordingly made both servings here to be 1/4 of the pie to make it fair.  (Sources:  Pizza Hut, Domino’s) 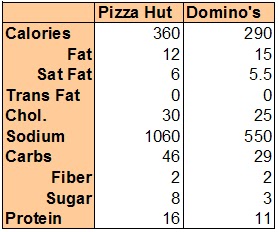 They are pretty close!  BUT 70 calories per serving is a lot if you are like me and probably can’t stop at 1 serving of pizza… The sodium is seriously high in the Pizza Hut too (notice they added salt to their dough above also).  And where are all the carbs coming from in the Pizza Hut stuff?  Weird.  Since they are so close and I’m annoyed about the PHOs in the Pizza Hut stuff, I know I’ll be choosing Domino’s more often.  Now if I could only get them to cut it in slices and not those silly square pieces…

Do It Yourself
I’ve decided to add this new section and see how it goes.  Let’s figure out how to make something similar at home!  Luckily, I already make pita pizzas pretty regularly for a quick dinner.  I use Kontos Multigrain Pocketless Pitas (the flatbreads are bigger and therefore more calories!).  I load it up with whatever toppings I like (sauce, cheese, veggies usually).  I preheat the oven to 375º and pop in the pita on a cookie sheet for about 12-15 minutes (depending on how crispy you want it).  So in less than the time it would take you to call the pizza joint and wait for the delivery man, you can have a fresh pizza waiting!  Oh, and I keep the pitas frozen along with the cheese and prep it frozen so no excuses about not having the ingredients around 😉

2 thoughts on “FS: Take Out Pizza”