Today was the big day!  Today, we rode in the 2011 American Cancer Society Bike-a-Thon ride from Philadelphia, PA to Buena, NJ! 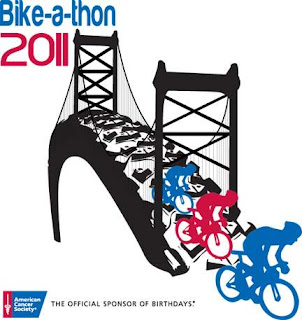 My day started off at 4:30 AM when Rob’s alarm went off.  We crawled out of bed and threw our clothes on.  Luckily, we were smart and had laid it out the night before!  I also grabbed our bike pack (which was packed and ready to go also).  We headed downstairs to find my dad all ready to go too!  He works late during the week so we knew getting up early would be pretty hard for him.  He was nice enough to drive us to Philadelphia for the bike-a-thon today though.  We had dropped off Rob’s truck at the finish line the night before so we wouldn’t have to worry about transportation.  We had to fuel up before the ride so we stopped at Wawa.  Breakfast of champions: 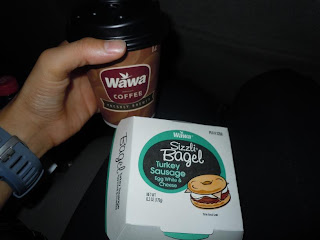 The day was really turning out to be beautiful.  It was going to be hot but with biking, at least you don’t feel it as badly!  I snapped a shot of the Benjamin Franklin Bridge as we drove to the start line.  The race would begin with us riding over the bridge, all lanes open!  How awesome is that?! 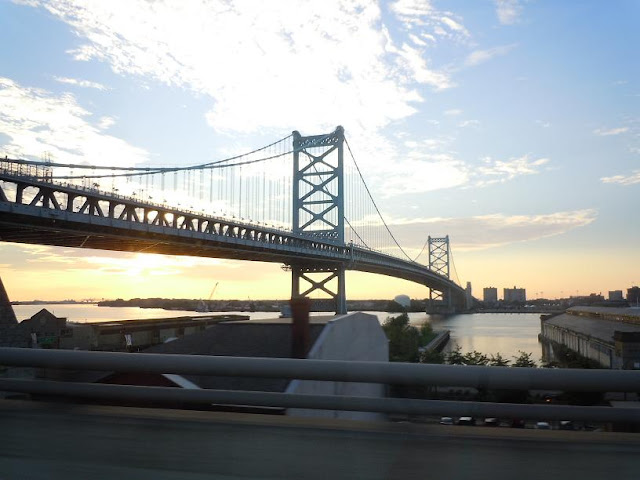 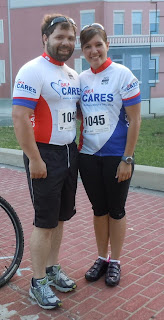 We hopped out of the truck and got our stuff together.  Dad snapped some “team” photos for us.  LoL.  We had a third but he broke his foot last week!  Crazy!  he was really bummed.  We both work for the same company, so we asked them to “sponsor” us (basically to give us shirts, lol).  We got 1 person from our office to volunteer too.  It is a big company out of DC but our office is very small.  They let Rob join too and gave him a jersey for the ride too!

We hung around and found the bathrooms.  They were much nicer than at any running race I’ve been at!  I had packed tissues “just in case” but it was well stocked 🙂  LoL.  We had only gotten there a half hour early so we didn’t have to wait too long.  We hung out in the back and waited for the race to start (despite being told how *cool* it is to ride elbow to elbow over the bridge, I’m a little bit of a wuss, ha!)  It does look pretty awesome though from the sky! 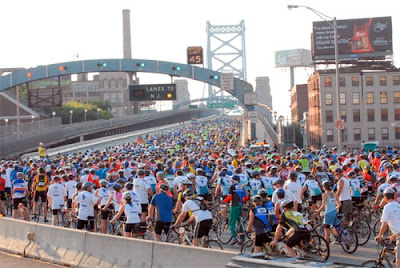 I snapped a picture of the sign for the Bridge and even managed to snap a picture while riding over the bridge!  That was really tricky and I didn’t wipe out 🙂 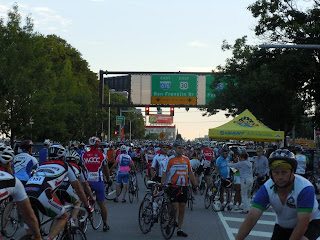 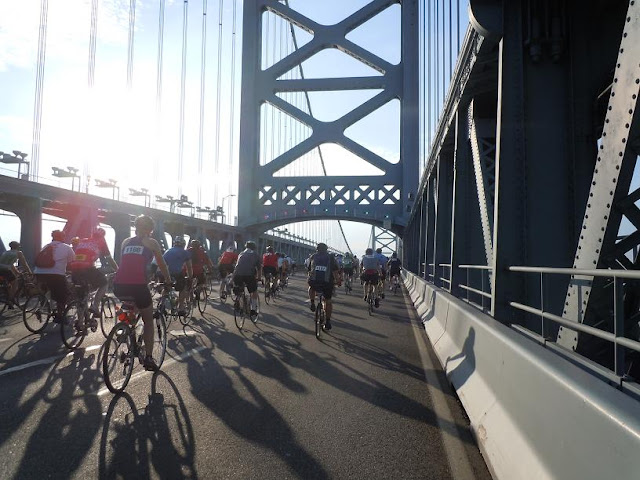 The first leg of the race was pretty easy, about 12 miles.  The route was almost all blocked off from traffic.  I did get a kick out of watching cars sitting on merge ramps waiting for all the bikes to go by!  Ha!  Oh!  I almost forgot.  I don’t have a map out of the route because… My Garmin wouldn’t work!!!  It has been acting up and it won’t keep a charge.  I am sending it back this week to get a new one/it fixed.  I didn’t let it ruin my day though!  I just kept an eye on the clock (on my bike odometer which isn’t working either, gr.).  Anyway, we rolled in to the first rest stop still feeling pretty good!  I enjoyed some granola and water.  I wasn’t really hungry yet though so I only ate half.  It was really delicious though! 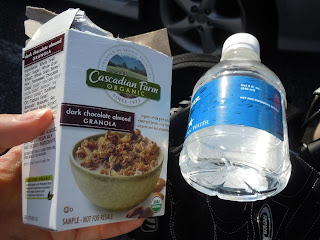 We didn’t spend much time at really any of the rest stops.  We spot the most time at the second because we both had to use the bathroom again (good sign!  we were hydrated!).  Here are some pictures from the stops: 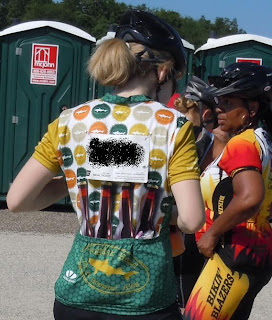 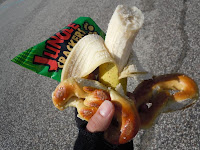 This girl had a Dogfish jersey on that looked like there were bottles in her back pockets.  Ha!

And I seriously love all the free food.  Om nom nom! 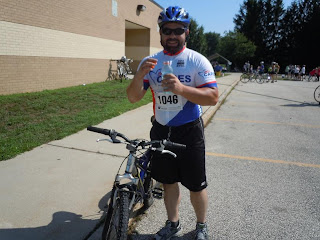 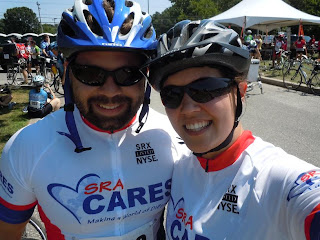 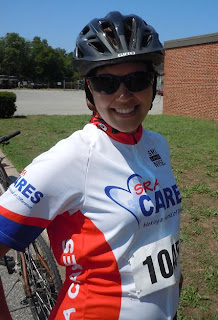 Obviously not pictures from while we were riding.  LoL.  Too difficult to get the camera out (and too dangerous).  Rob and I kept debating on if R means “Race” or “Ride”.  LoL.  They had these signs along the route that said “remember this is a RIDE not a RACE”.  Whoever was being more speedy would argue for Race 😉  At one point, Rob told me that SRA stood for “Speed Racer Angela”.  Ha!  I sometimes have an issue keeping my pace low so that I can finish.  I think I did really well today!  Even with all the stops, it took us about 5 and a half hours to finish the 61 miles.  Not bad!!!  Also, we found this couple that we paced for like 15 miles.  It was nice following someone.

One person on the route recognized my company and asked if we were from DC.  We also had one guy tell us we were “hard core” for doing the ride on mountain bikes!  Ha!  Anyone can do it on a road bike!!!  (as Rob says).  We really had a blast though.  The route was awesome and it was just so much fun!  I can’t wait to do it again next year.  It really was just a light-hearted ride.  So after a beautiful ride, we crossed the finish line!  It was really awesome, so much cheering and cow bells.  The whole nine yards.  Best.  Finish Line.  Ever. 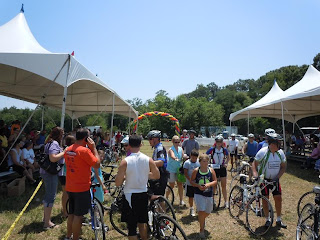 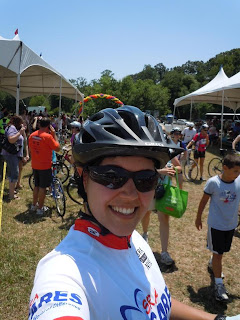 Best part about having the mountain bikes?  We road through the field to the truck to put them away.  LoL, do THAT on a road bike!  Then we headed to get more free food and to say hello to my coworker who volunteered at the finish line. 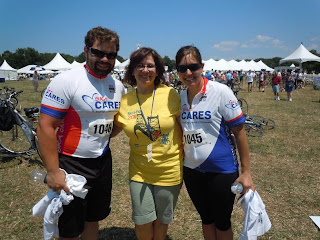 Rob also makes fun of me because I have a special talent of getting grease all over me! 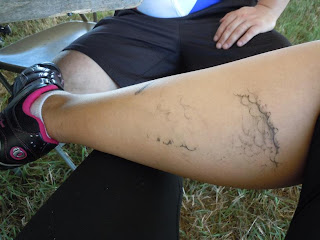 And still beaming after the ride! 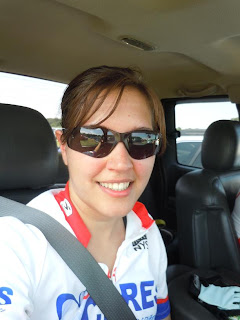 Seriously, it was such a great ride.  I am a little sore now but nothing like a few weeks ago (when I was so sore, I cried).  I think I’ll be ok tomorrow though!  So glad I did this ride!!!

So anyway, after the ride, I tracked my food and the cycling on my SparkPeople app: 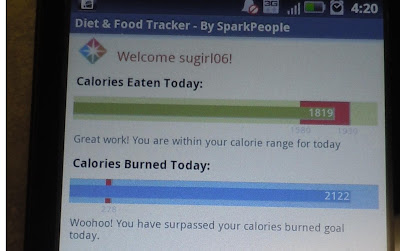 Holy moly!  I figured out my “differential” and realized I was at an extra 2000 calories burned for the day!  That meant I still needed to refuel and I of course refueled appropriately: 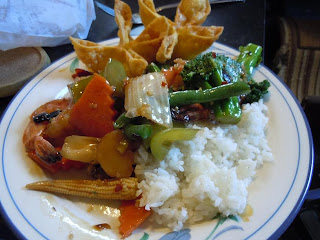 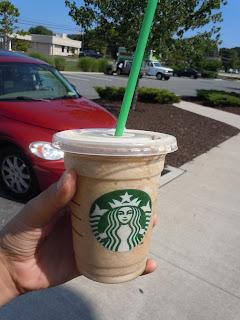 Chinese and Starbucks!!!  Ha!  Still went with nonfat (no whip obviously) and ordered Hunan shrimp which isn’t a bad Chinese choice at all.  I can have the leftovers all week for lunches!  The crab wontons were the best treat ever though!  Anyway, today has been very long (all weekend actually) and its time to go relax with the hubs and let these legs rest!  I hope everyone had a great weekend!