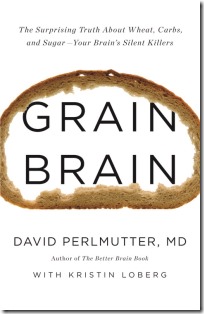 If you are familiar with my blog, you know I support the Paleo Diet and often eat that way (though not always).  At one time, I was a distance runner so I thought I needed more carbs than non-endurance athletes, but as a recovering injured runner that isn’t the case now.  Also, a few months ago, I was looking for research on the “right diet” or the “right macronutrient ratio” to help me concentrate better and have more energy.  I was afraid that going full Paleo mid-semester would hurt me (from the carb crash) and avoided that option.

It was like fate has stepped in when I saw Grain Brain by Dr. David Perlmutter at BJ’s for a discounted price.  I could have gotten it $2 cheaper on Amazon but I knew if I didn’t by it right away, I would procrastinate, and I felt that this was a book I needed to read considering my previous concerns with health.  It took me about a week to finish it with minimal dedication to reading it (mostly at night before bed).  I have to admit I skimmed quite a bit because it was information I already read before.  On to the review!

The book is broken into three different sections:

I found the first half of the first section very interesting.  It talks about how sugars and gluten can affect the functionality in your brain by affecting hormone levels and other chemicals that make your brain work.  It talks a lot about how inflammation affects your entire body, but mostly how it is affecting your brain.  This is information you might have read in another Paleo Diet book, but this time they concentrate on what it does to your brain and its ability to function rather than talking about diabetes and other diseases.  There is a large emphasis on dementia and Alzheimer’s Disease, since those are major diseases of the brain, though they do discuss other studies centering around lesser brain function such as memory and test scores.  Towards the second half of the first section, I felt like it was repeating a lot and I started to skim.  I think I was mostly just bored at this point because I had heard a lot of the same information in other books.

The second section was basically a transition from the science into the diet.  I would say it was more of science behind why the diet will work to make your brain operate efficiently.  He essentially talks about why his diet is the best one for a better brain by changing your diet, taking supplements, exercising, and controlling your hormones.

The third section is where the diet plan comes into play.  It is very similar to the Paleo Diet but with subtle differences.  Note: The Paleo Diet eliminates all grains, legumes, and dairy, allowing you to eat meats, vegetables, fruits, and nuts.

I also want to mention that the book is sprinkled throughout with stories of Dr. Perlmutter’s own patients.  Dr. Perlmutter is a board-certified neurologist so his credentials are already impressive (this isn’t just some guy writing about science).  He also takes a keen interest in nutrition as he is a Fellow of the American College of Nutrition.  I like to see the the author can be trusted to talk about his chosen subject.

Finally, he encourages you to speak with your own doctor and have certain, specific blood tests done to check your usual levels but also to test for gluten intolerance (note: intolerance, not celiac disease).  He gives very specific instructions in this regard which would be very helpful if/when you approach your own doctor to discuss this (bring the book with you!).

At first, I was a little concerned about the low amounts of carbs in the diet.  We have all be conditioned that low-carb is evil.  Why???  So I did some of my own research and started to think about eating Paleo.  That is generally higher-fat too.  Is it low carb?  I hunted around a found a great article from Mark’s Daily Apple (the go-to spot for Paleo/Primal eating) on the amount of carbs/fat/protein when eating Paleo/Primal (Primal is essential Paleo plus dairy).  What I figured out is that Paleo is essentially lower-carb but not as low as Grain Brain (mostly due to the inclusion of sugary fruits I think), but it is comparable.

So while I’m not afraid of eating healthy fats, I am afraid of low-carb, and this is a socially conditioned mentality that I just have to break.  Actually, Dr. Perlmutter discuses how and why we can survive off of little to no carbs in our diet at all (he does discuss ketosis and possible problems with eating no carbs so don’t worry, he’s got that covered too!).

Finally, Dr. Perlmutter really does lay out the evidence that this is the right way to go if you want better concentration, more energy, lower risk of dementia and other brain-related problems, etc.  The studies he uses are published in reputable journals and have sufficient statistics behind them (such as a large study group, use of a control, etc. – read Bad Science if you don’t know what I’m talking about!).

So what about for myself?  I think this is the way to go – at least back to eating Paleo at the minimum.  I definitely have a small carb addition (bagels have been my weakness lately) so it will be tough but I think my health in the long term is more important than any cravings.  Why wouldn’t I want to do something that will make me feel great?

All book reviews are done on my own accord unless otherwise stated.  I paid for this book with my own money.

Check out my other Book Reviews here!

What are your thoughts on low-carb diets? 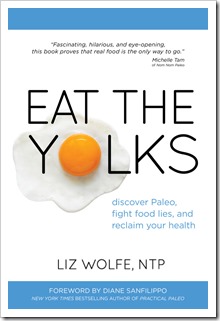