I did nothing all weekend and then today, I have tons to blog about!  Yesterday, Rob did manage to stay home ALL DAY.  So when it got dark (which he claimed was then “night” and he could leave the house), I let him go to Lowe’s.  Apparently he hates being home all day but we did get quite a bit done.  Anyway! 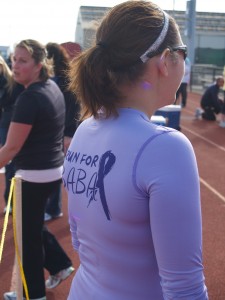 This morning started with the Free to Breathe 5K.  It is for Lung Cancer and when I heard about it, I immediately knew I had to run it for my Baba who passed away over the summer after 2 bouts of lung cancer.  I sent the word out and some friends joined me.  Lauren of course and her friend Nicole (it was her first!) and Nicole’s sister-in-law (and her hubs).  Jack also came along for his first race!  Rob even went in secret and got this shirt printed for me after I was bummed I couldn’t find the “I Run For” Underarmor shirt in anything other than pink!  He is the best!

It was their first year doing this 5K and it was a little disorganized.  When I pulled up, I couldn’t even tell where it was!  I was on the wrong side of the building and with Lauren’s help, I got turned around to find the check in table.  Then, there was confusion over where the start line was!  Oh boy.  Finally, we got started and off we went! 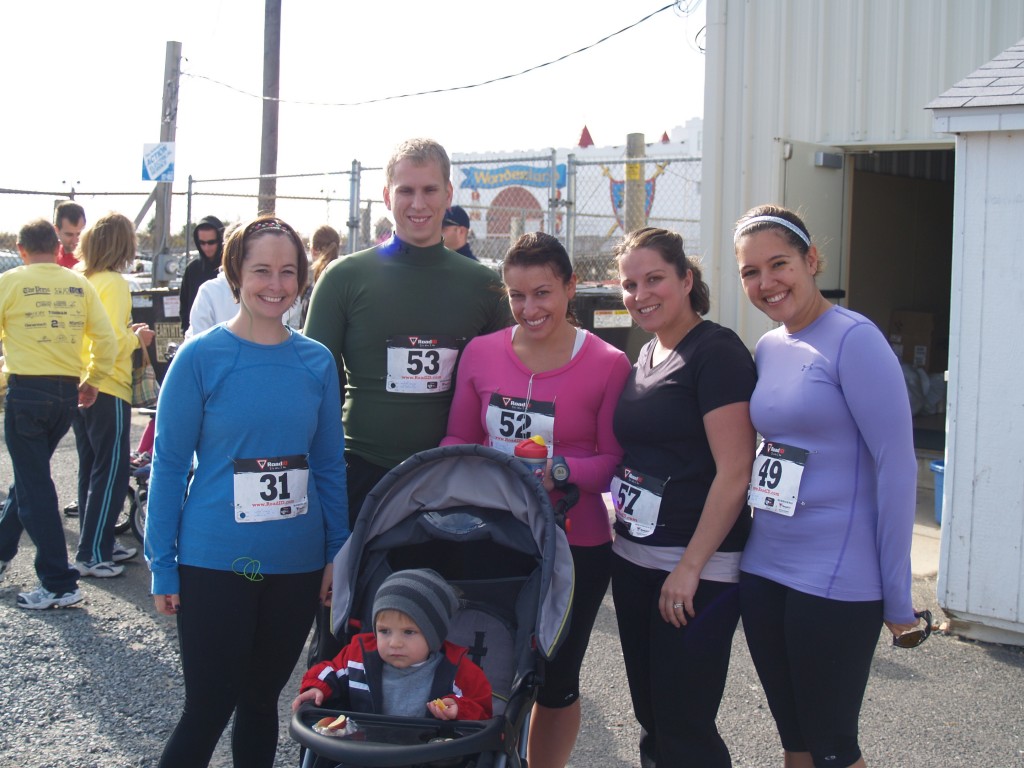 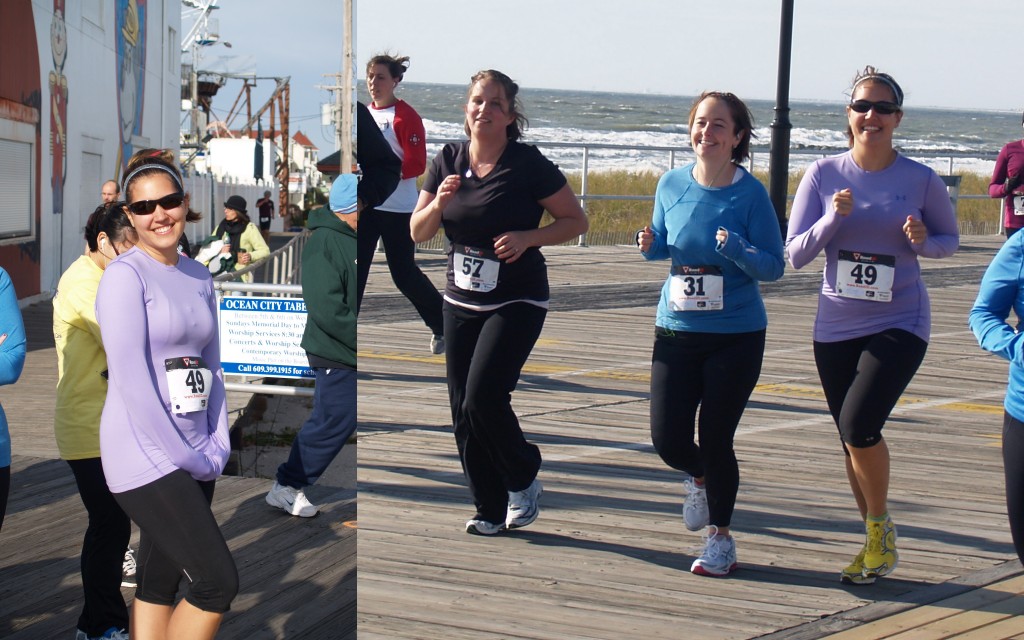 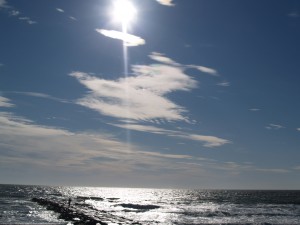 It was really a beautiful day out… except the WIND!!  When we turned around, it was aweful!  The wind was really terrible.  Then we caught up to Lauren’s friend with the stroller and she was having a really hard time.  Lauren tried taking it but it was like a sail in the wind!  Lauren and I pushed it together, each of us with one side.  That seemed to help.  Our times weren’t bad considering how strong that wind was! 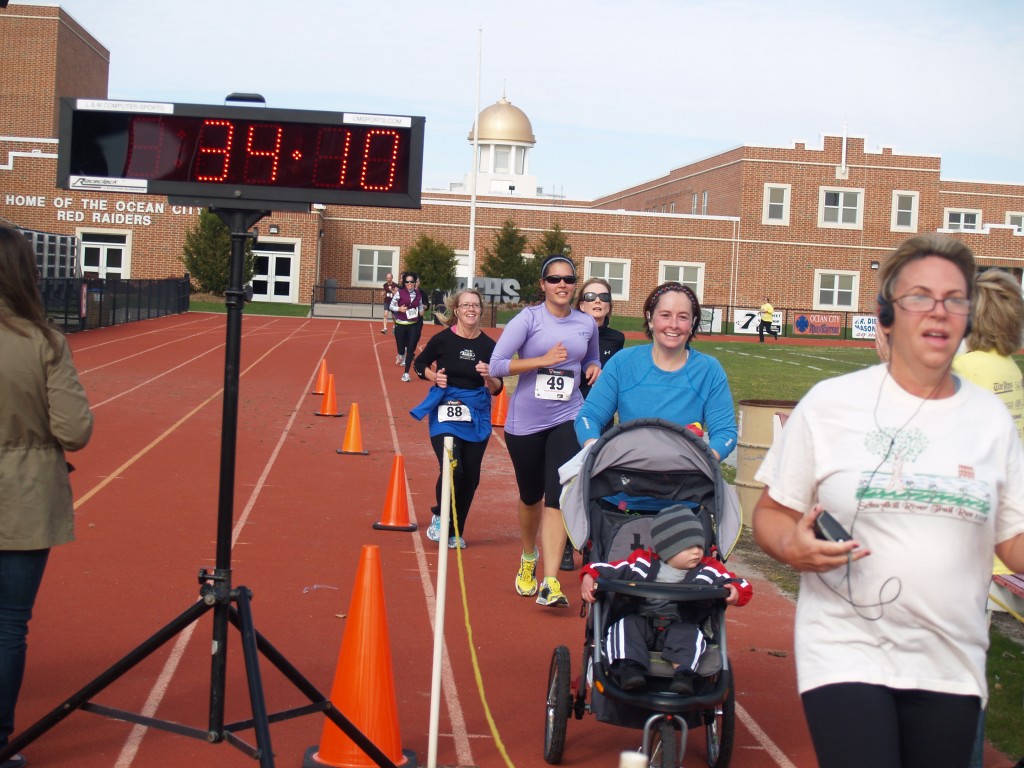 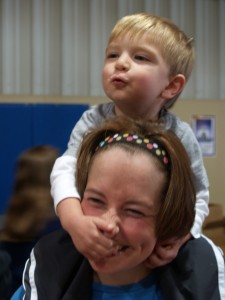 The race was big enough that none of us placed so we had some snacks and water and headed out.  I had planned on running the rest of my long run for the day afterwards but I had a serious stomach ache after the race.  It happens sometimes.  Still trying to figure out how to handle my sensitive stomach and running!  Ugh!  Oh and I just have to throw this photo of Jack and Lauren in.  He is just so adorable!

We got home and I sat around in my running clothes, trying to decide if I should go run.  I decided to start some baking that needed to be done and then head out for my run.  Well, my stomach never got any better and I ended up doing only about 15 minutes of Zumba on my XBox Kinect before calling it quits.  Its just not cooperating today!  I did get this lovely pumpkin bread made though.  I had a pumpkin that I cooked down myself and needed to make something!  It came out to about the equivalent of 4-5 loaves of bread! 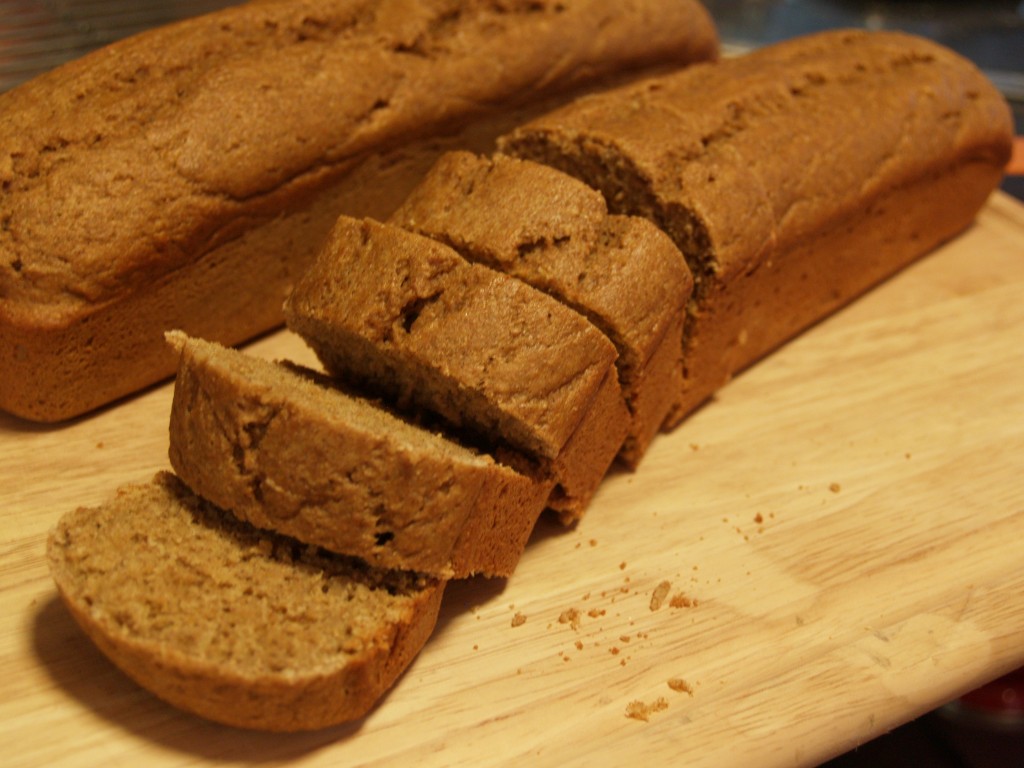 I posted the recipe on Spark Recipes here.  It came out really thick and rich.  I love it!  It is about 130 calories a slice so not bad!  And hardly any fat because there is no butter or oil in it at all.  Definitely a nice fall treat.  I will be giving most of this away though so I don’t have to eat it (although I think Rob will handle that for me!)

Not much else, I have to go finish up homework.  I do have a concern though.  I think the Humane Society switched out my cat.  LoL.  Spooky has been mean and nasty for months (she was in heat for like 3 months straight).  She was only lovey every so often before and it was never very lovey.  Well, the last 2 days, she has been walking around chirping (she doesn’t really meow), wanting to be pet.  Then we realized she was purring when we pet her!  She hasn’t purred since she was a kitten!  She is 2!!!  And she has been licking and cuddling with the kittens.  She HATES the kittens!  I guess her hormones were really out of wack and getting her fixed helped?  All I know is that this is not our cat… 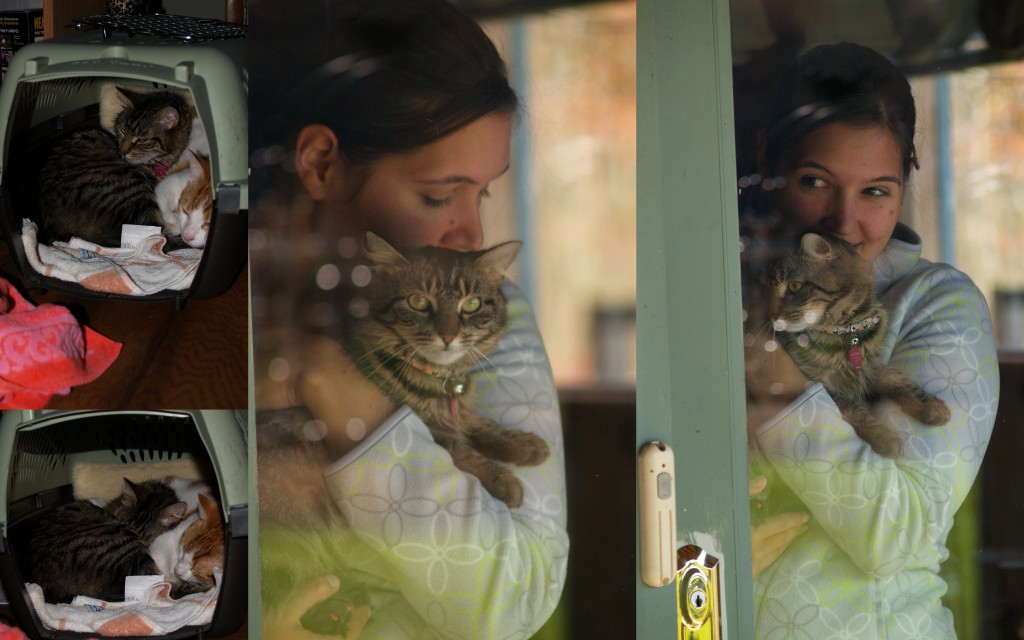 3 thoughts on “Free to Breathe 5K”