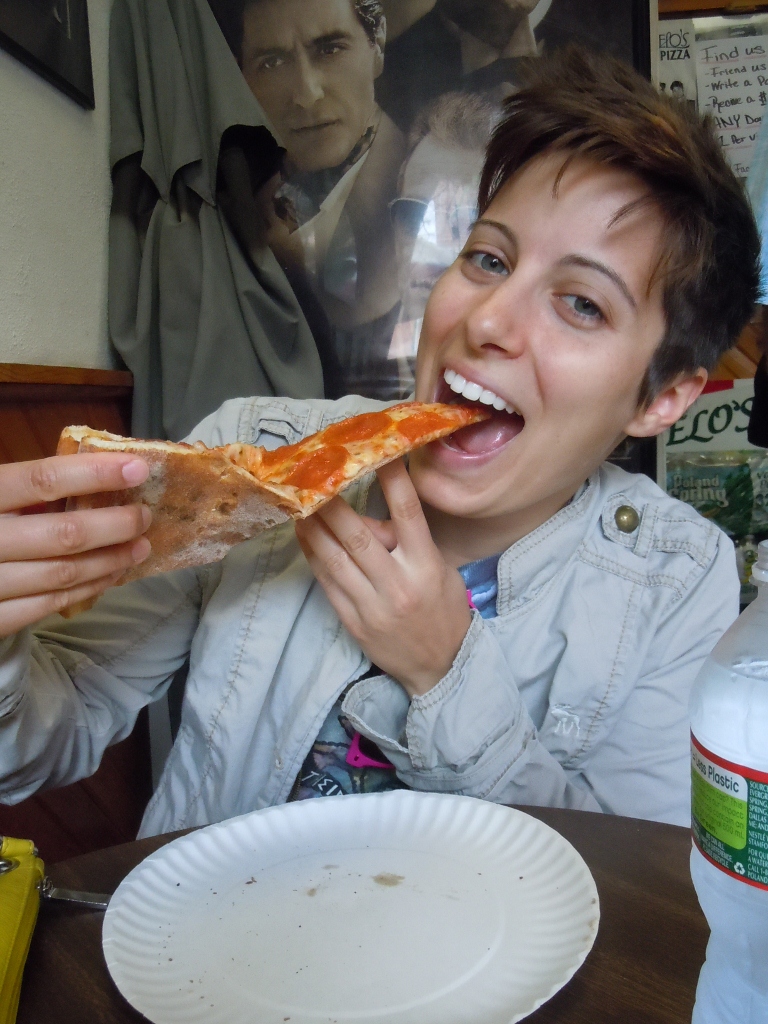 You guys probably don’t need a daily update but I had such a terrible day yesterday that I sort of feel the need to confess.  First off, I had pizza (not Paleo!).  Alissa and I headed downtown together and she really wanted pizza and I readily agreed!  She was kind enough to pose for a picture.  The pizza was delicious, had a nice thing crispy crust the way I like it!  But it doesn’t follow my rules at all.  Ah well!

Next, we headed off to the health food store since she needed some things.  I also found that they sell So Delicious products which make Coconut Milk based coffee creamer and “yogurt”.  I had been looking for them and now

know where to get them!  Also, I picked up these delicious drinks called Kombucha on Alissa’s recommendation.  Have you tried it?  They are basically fermented drinks so they are fizzy and AMAZING.  And only 70 calories for the bottle but at $4 a piece, they won’t be bought that often.  A nice all natural alternative to soda though because that’s what it tasted like!  Yum!!

After this, we realized we were pretty close to the YMCA and since I’ve been debating on getting a gym membership and Alissa heard they had a nice pool, we decided to go check it out.  I didn’t take any pictures but made this nice comparison chart with the campus gym: (red=bad, green=good, blue=neutral, yellow=unsure) 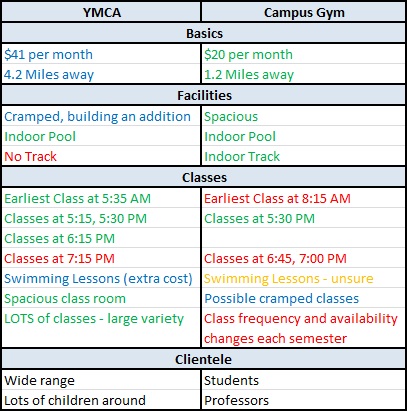 They are pretty close, almost a tie.  Of course, I can weight things as being more important also.  I mention clientele because I’d like to meet some new people in the area, maybe find a running buddy.  The Y has a running class too which would be awesome for me!  I’ll have to mull this one over.

Finally, my goals chart for yesterday.  I just managed to get my water in at the end of the day.  Oh and I ate ice cream last night, a little too much (leftover from Wednesday).  I felt sick all night!  Will I ever learn?  Between that and the pizza, I was a wreck.  I even feel a little bloated today (even my fingers are puffy).  Ah well.  I didn’t work out either but I packed everything up for leaving today and cleaned my kitchen.  At least I did something productive!

Wasn’t my day so funny?  I ate like crap, skipped my workout, but shopped at a health food store and checked out a local gym.  Ha!

What are things you look for when joining at a gym?  What are some of your pro’s and con’s?