I’m obsessed with my lunch box.  A few weeks ago, I bought a lunch box set at Staples on a whim because it was inexpensive and looked cool.  I loved it so much, I ordered 2 other ones on Amazon this week and they are here! 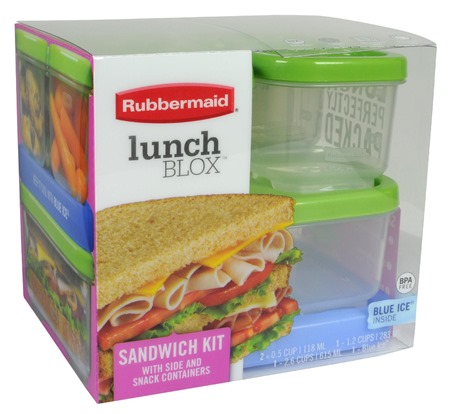 I’m using the Rubbermaid Lunch Blox.  They are lunch containers that snap to an ice pack between them.  They are BPA-free, microwave safe, and freezer safe.  The reason they appealed to me was because they would stay organized in my lunch box and not fall/slide around.  I can’t stand it when I open my lunch box and everything is flipped and moved!  (Especially the sauces that have leak potential.)

The reason I got more sets was so that I could mix and match containers and ice packs of various sizes.  You can also buy just the containers so that is an option if I find I need a second of the two larger ones I have. 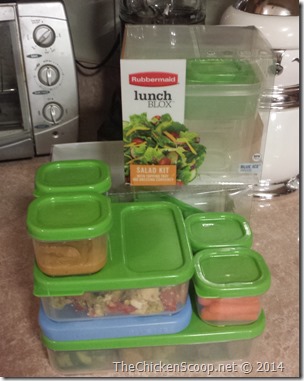 I also got the salad container because although I’ve tried the layering method, my salads are always weird when I go to eat them hours later.  This will allow me to keep everything mostly separate.  Also, the salad container is larger and taller than the rest so it gives me another size option to use when packing lunch and dinner.

I also really like that they are rectangular.  I have some lunch containers that are round which is a waste of space in my lunch box which needs to hold at least 2 meals.  It’s all about efficiency!

The best thing from a health perspective is that they can help with portion control.  All the containers are marked with ounces and milliliters on the outside for easy measuring!  The salad set even came with a little 2 ounce container for your salad dressing.  This is awesome for me because I hate measuring my food out if it will create more dishes (like using a tablespoon to measure salad dressing).  This makes it so easy!

The only downsides to the Blox is that they are plastic and some people won’t microwave in them.  I had glass containers but they are way too heavy for me to carry around all day in addition to my heavy book bag.  (So actually, plastic works for me).  The second downside to me is that they containers don’t clip together.  They clip into the the ice packs but not to each other, which is a downer when I don’t need an ice pack.  Really, that would be the only thing I didn’t like and would suggest as a design improvement. 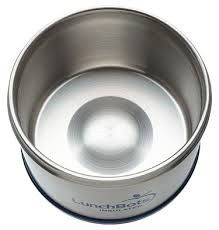 While I was ordering stuff on Amazon, I also tacked on a LunchBots 16 ounce thermal for hot foods, which I have seen on Nom Nom Paleo a bunch of times.  I have a Thermos thermal but I hate how it has a lip/edge on it, making it hard to get food out of the container.  The LunchBots one is straight up and down on the sides, making it easy to eat out of.

One thing I didn’t consider was that since this container is metal, it will share its heat with its surroundings so I’ll have to pack it in a separate travel bag if I also pack something cold.  I have the Zipper Thermal from Thirty One so I’m hoping it will fit in there, which I can then just tuck into my book bag.

Phew!  I didn’t realize I could rave so much about silly lunch containers!  It is something I use every day and making it one less hassle is nice.  I have enough real stress to deal with!

Are you as picky as me about your lunch box?

I never was when I just took it to work and put it in the fridge.  Now that I travel around with it a lot, I find it more of a hassle, especially when toting multiple meals.